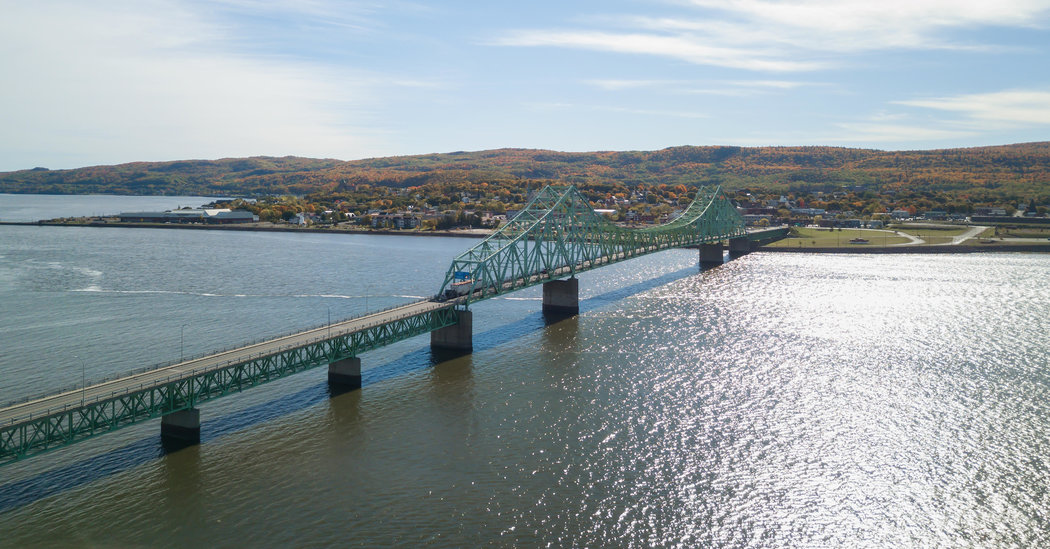 Hi, this is Catherine Porter, a Canada correspondent for The Times, based in Toronto. I am taking over the Canada Letter this week from Ian Austen, who is on vacation.

It’s one thing for foreigners to be barred from Canada during a pandemic. But Canadians not being allowed to travel into other parts of their own country?

This week, I reported on the case of Dr. Jean Robert Ngola Monzinga. He’s a family doctor who also worked in a hospital emergency department in the small city of Campbellton, New Brunswick.

The police are investigating him for something no one would have considered a crime just four months ago — leaving the province briefly and not self-isolating after returning.

Dr. Ngola, who has been accused of bringing the coronavirus back with him and sparking an outbreak in the region, said he was gone only for 28 hours and had valid reasons for his trip; he had to get his 4-year-old daughter from a suburb of Montreal and attend a job interview.

But the province’s Emergency Measures Act bans all “unnecessary travel” into the province and stipulates that every returning New Brunswicker “must isolate for 14 days upon re-entry.”

With some exceptions, the act basically seals the province’s borders — not just to Americans looking to enter through Maine, but to other Canadians. The new measure came with a hotline, so people could report rule-breakers, including suspected outsiders with Quebec or Nova Scotian license plates.

New Brunswick is not the only corona-fortress in Canada.

Newfoundland and Labrador, Prince Edward Island and all three territories passed similar measures, banning entry to nonresidents. Each emergency law is different, and constantly changing; the Northwest Territories recently retracted its travel ban, and Prince Edward Island has repeatedly loosened its restriction. This week it provided an exemption for nonresidents who want to come to the island and provide support to family members.

But in all cases, this patchwork of orders mark a first for the country, said Cara Zwibel, a lawyer with the Canadian Civil Liberties Association (CCLA)

“We have never seen this before,” she said from her home in Toronto. “There have been some restrictions on trade between provinces, but we’ve never had checkpoints.”

The federal government’s announcement last week that it was opening the international border to immediate family members of Canadians underscored a bizarre double standard.

A Canadian living in New York could fly into St. John’s and would have to be admitted under the Canadian Charter of Rights and Freedoms, said Rosellen Sullivan, a criminal defense lawyer in St. John’s. But his brother living in Yellowknife could be turned away at the airport or ferry terminal.

“It’s insane,” Ms. Sullivan said. “New York has a lot of cases. It was a hot spot. The Northwest Territories is not.”

Ms. Sullivan is challenging the travel ban in Newfoundland and Labrador on behalf of the CCLA on multiple grounds. She argues it breaches the same charter mobility rights that assure a Canadian citizen entrance to the country.

She is also contesting the police powers that were introduced to enforce the new order, allowing the police to detain people without a warrant and bring -them to a “point of entry” — ostensibly to cast them out. This has not been done to date, the authorities say.

These things would not be condoned, Ms. Sullivan said, “in the non-Covid world.”

The person at the center of the case is Kim Taylor. The night the law passed, her mother died while watching television at home in St. John’s. Her death, though unexpected, was not Covid-related; she had a heart condition and had been housebound for years.

The next morning, Ms. Taylor applied for an exemption to the emergency law, so she could fly from her home in Halifax and help with her mother’s funeral arrangements.

Days later, she got a refusal letter.

“Truly, I felt like somebody had kicked me in the gut,” Ms. Taylor said. She said she was in shock — “shock that the province I was born in, raised in, educated, visited every year since I’ve left has told me, ‘No you can’t come in.’”

Newfoundland and Labrador’s minister of justice and public safety argues the measures were necessary to protect lives. But Ms. Taylor argues she had intended to self-isolate for 14 days in her parents’ basement apartment, before giving her father and sister a much-needed hug.

After she retained a lawyer and applied a second time, she was granted an exemption but it was too late. Her husband’s bereavement leave had finished. The funeral, she said, will happen when the travel ban and self-isolation rules have ended.

The case, which is scheduled to be heard by the Newfoundland Supreme Court in August, highlights the same tension as Dr. Ngola’s: As the dreaded the coronavirus ebbs, and our economies open again, what is the proper balance between individual freedom and state-enforced collective responsibility?

By the time the court rules, the travel bans across the country might have lifted. But what will happen during the expected second wave, Ms. Taylor asks.

“Why is it anyone else should suffer like this?” Ms. Taylor said. “It’s not right.”

She added: “There’s just too much power and not a lot of thought put into it. I’m trying to do what I can to right a wrong.”

How are we doing?

We’re eager to have your thoughts about this newsletter and events in Canada in general. Please send them to nytcanada@nytimes.com.

Forward it to your friends, and let them know they can sign up here.

Congrats are in order to Bambi and Lil Scrappy. It looks like their family is expanding with another little one