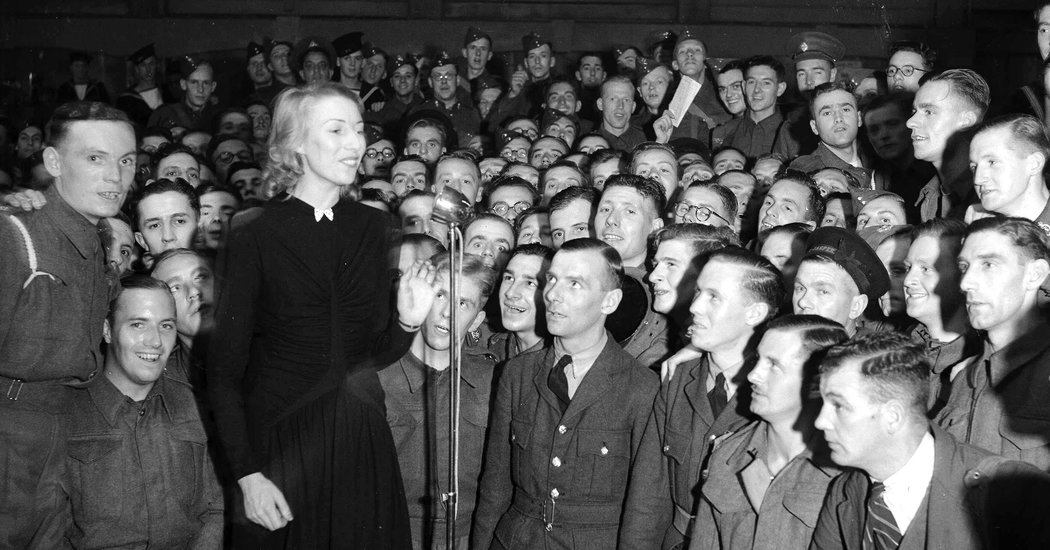 Vera Lynn, who sang the songs that touched the hearts and lifted the spirits of Britons from the bomb-blitzed streets of London and Coventry to the sands of North Africa and the jungles of Burma during World War II, died on Thursday at her home in Sussex, England. She was 103.

Her death was confirmed by her representative, Andrew Gordon.

In those wartime years, Ms. Lynn became known as the “Forces’ Sweetheart,” and long afterward the melodies lingered on: “We’ll Meet Again,” “(There’ll Be Bluebirds Over) The White Cliffs of Dover,” “A Nightingale Sang in Berkeley Square.”

Ms. Lynn herself once said: “People used to say that my singing gave them courage and hope. I think that is a great compliment.”

At a time when American fighting men plastered their barracks with pinups of Betty Grable, Lana Turner and Rita Hayworth, it was Ms. Lynn and her simple, sentimental ballads that captured the affections of British troops.

“I always believed what I was singing,” she once said. “My songs reminded the boys what they were really fighting for — precious personal things rather than ideologies.”

Without losing the common touch, she had come a long way from East Ham, the London neighborhood where she was born Vera Welch on March 20, 1917. Her father, Bertram, was a plumber. Her mother, Annie, fostered her daughter’s performing career. Vera led a local dance troupe and was allowed to sing at the end-of-term school show because her mother had made the costumes.

At 7, Vera was singing in workingmen’s clubs in East Ham. At 11, she left school to join a traveling variety troupe. At 18, having adopted her grandmother’s maiden name as her surname, Vera Lynn was singing with popular big bands. And at 20, she became the resident singer with the bandleader Bert Ambrose, whose weekly radio program made her a household name.

At 22, in 1939, Ms. Lynn won The Daily Express newspaper’s “Forces’ Sweetheart” poll in a landslide. In 1940, she began her own BBC radio show, “Sincerely Yours,” which was beamed to troops around the world on Sunday nights right after the news.

“Winston Churchill was my opening act,” Ms. Lynn once said.

She read letters from the girlfriends, wives and mothers the troops had left behind. She sang her sentimental songs, “We’ll Meet Again” being the most popular. In the blitz that sent the Luftwaffe on nightly bombing raids over London in 1940, she sometimes slept in the theater until the all-clear sounded, then drove home through the rubble.

“The shows didn’t stop if a raid started,” she said. “We just used to carry on.”

Often, it seemed, Luftwaffe bombers droned over London just as Ms. Lynn sang “A Nightingale Sang in Berkeley Square,” which became the theme song of the blitz.

“A nice, quiet, gentle song; then the siren would go, and you kept on singing till the show was finished,” she said. “Then we used to have a bit of a party afterward.”

The powerful emotional content of her singing prompted concern at the highest levels of the BBC and among members of Parliament that such sentiment might sap the troops’ will to fight. As thousands of fan letters poured in, an internal BBC memo noted, “‘Sincerely Yours’ deplored but popularity noted.” The show went on.

Even in Nazi-occupied Europe, where death was the penalty for listening to the BBC, Ms. Lynn had her fans. “The Dutch used to listen to my programs in haystacks and hide themselves away,” she said. “They’d listen to the 9 o’clock news on Sunday night. It was their only link to the outside world.”

Ms. Lynn toured Burma (now Myanmar) for three months in 1944, earning the enduring affection of the so-called Forgotten Army, which battled the Japanese in jungle combat there. She started her journey with chiffon ball gowns, and when they fell apart, she finished in shorts. (They wound up as an exhibit in the Imperial War Museum in London.)

Just before the war began, Ms. Lynn had met a saxophonist and clarinet player named Harry Lewis, who performed with the Ambrose band. They married in 1941, and Mr. Lewis devoted his life to managing his wife’s career. But when the war ended, she said she was retiring. Their only child, Virginia, was born in 1946, and the family settled down to life outside Ditchling, a village in East Sussex.

She is survived by her daughter, Virginia Lewis-Jones. Mr. Lewis died in 1998.

In truth, Ms. Lynn was far from retired. She had success on television; she toured the world; she appeared onstage and in films and sang before British royalty in command performances. In 1951, she became the first British singer to top the charts in the United States, with “Auf Wiederseh’n, Sweetheart.”

“We’ll Meet Again” enjoyed an ironic second life in 1964 when it was heard over scenes of nuclear devastation at the end of Stanley Kubrick’s dark satire “Dr. Strangelove.”

Ms. Lynn’s popularity endured well into the 21st century. In August 2009, she became the oldest living artist to reach the British Top 20 album chart when her collection “We’ll Meet Again” was reissued to coincide with the 70th anniversary of Britain’s declaration of war on Germany. A month later, the album reached No. 1.

Though the decades passed and she drifted out of the entertainment mainstream, she remained the Forces’ Sweetheart — evoking nostalgia with her old hits, appearing at reunions of veterans’ organizations, rallying support for soldiers’ widows and charities that helped Britain’s wartime generation.

Oddly enough, one of her greatest hits, “(There’ll Be Bluebirds Over) The White Cliffs of Dover,” was written by Americans: Walter Kent, who admitted that he had never seen the cliffs, and Nat Burton.

In 1995, Ms. Lynn got involved in making a video called “Our War to Remember,” which she called a tribute to the women of the home front. She said she wanted the younger generation to understand what World War II had signified.

“I want them to realize what it was all about, why people fought and died so they could be alive in England, not a German-occupied country,” she said at the time. “If they can see the struggles these people made, young people would appreciate the older generation a little more.”