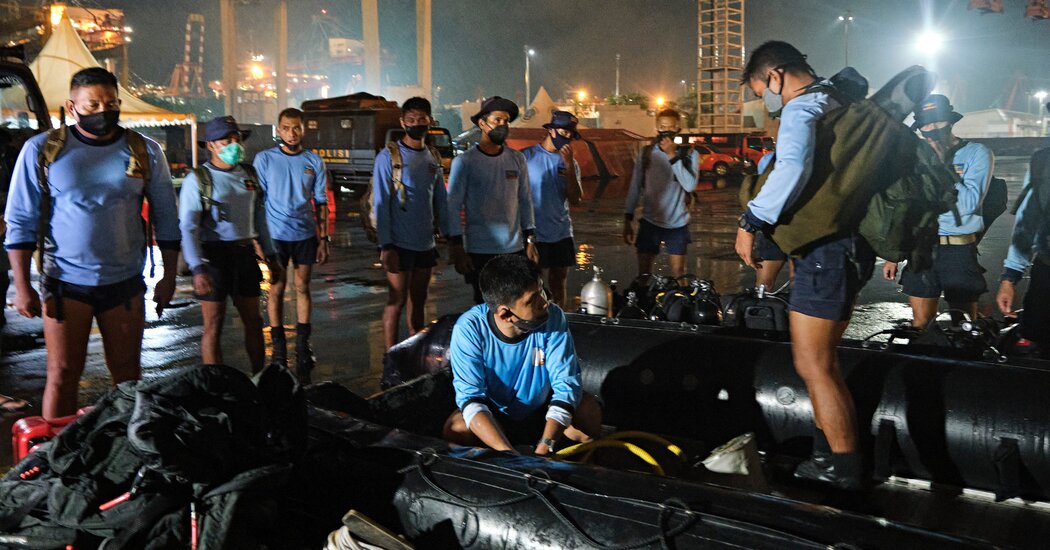 BANGKOK — A passenger jet carrying more than 60 people crashed into the Java Sea on Saturday, minutes after taking off from the Indonesian capital, Jakarta, Indonesian officials said, bringing renewed attention to a nation long troubled by aviation disasters.

Indonesia’s Transportation Ministry said that the last contact with the plane, Sriwijaya Air Flight 182, was made at 2:40 p.m. local time. The Boeing 737-524 was bound for the city of Pontianak on the island of Borneo. The plane had 62 people aboard, according to the Transportation Ministry. Four minutes after taking off amid a heavy monsoon season rain, following a delay because of bad weather, the 26-year-old plane lost more than 10,000 feet in altitude in less than 60 seconds, according to Flightradar24, the flight-tracking service.

The Indonesian National Search and Rescue Agency said that it had found pieces of debris in waters just northwest of Jakarta that it believed may be from the plane’s wreckage, but that darkness and inclement weather had impeded its search. The area where the debris was found is known as the Thousand Islands.

“Tomorrow we are going to survey the location,” Soerjanto Tjahjono, the head of Indonesia’s National Transportation Safety Committee, said on Saturday evening, dimming hopes that survivors would be found.

The aviation sector in Indonesia, a developing country of thousands of inhabited islands, has been plagued by crashes and safety lapses for years. As Indonesian airlines, particularly low-cost carriers, grew rapidly to cover a vast archipelago, the domestic aviation industry has been undermined by shoddy aircraft maintenance and cavalier adherence to safety standards.

For years, top Indonesians carriers were banned from flying to the United States and Europe by those countries’ regulators. Budget airlines would start up business, only to declare bankruptcy after deadly crashes.

But Sriwijaya Air, which is Indonesia’s third-largest carrier and began operations in 2003, had never had a fatal crash.

And the Sriwijaya Air plane that disappeared from radar screens on Saturday, while a Boeing 737, was not a Max, whose faulty antistall system has been linked to two deadly crashes in recent years that led to the entire Max fleet’s worldwide grounding.

Instead, Sriwijaya Flight 182 was from Boeing’s earlier 737 500 series, which is considered a workhorse model with years of safe flying associated with it.

In 2018, Lion Air Flight 610 plunged into the Java Sea with 189 people aboard after the 737 Max jetliner’s antistall system malfunctioned. Another 737 Max crashed in Ethiopia in March 2019 after a similar erroneous activation of the antistall system.

On Thursday, the United States government said that Boeing would pay more than $2.5 billion in a settlement with the Justice Department related to the antistall software used in the 737 Max.

Lion Air Group, which owns Indonesia’s largest carrier, signed what were then the two largest aviation deals in history, one with Boeing and another with Airbus. With its 737 Max model, Boeing had targeted carriers in the developing world, like Lion Air, which were eager to pack their fleets with new jets designed for short, moneymaking routes.

But aviation experts warned that selling planes to carriers that were growing quickly in unregulated environments could be a recipe for disaster. Lion Air pilots, for instance, plowed into a cow, a pig and each other’s planes. Airline staff members complained of overwork, low pay and a lack of adequate training.

Jefferson Irwin Jauwena, the chief executive of Sriwijaya Air, said on Saturday night that “that are very concerned about this incident.”

“We hope that your prayers will help the search process to run well and smoothly,” he added. “What we will also do is to provide the best possible assistance to families.”

Rapin Akbar, the uncle of Rizki Wahyudi, one of the passengers on Flight 182, said his nephew called him on Saturday to tell him that the flight from Jakarta to Pontianak had been delayed. Mr. Rapin reminded his nephew, a national park employee, to keep his face mask on while at the airport to avoid contracting the coronavirus. Mr. Rizki’s wife, two children and mother were also on the plane.

As he waited for search and rescue boats to report back, Mr. Rapin said he was holding out hope. “There will be a miracle from Allah,” he said.

Indonesian aviation analysts said that, this crash could imperil Sriwijaya Air’s viability, especially as the coronavirus has emptied Indonesian skies of many planes.

“Sriwijaya is trying hard to survive, and the pandemic is making it harder,” said Gerry Soejatman, an Indonesian aviation expert. “This crash may spell the end for it.”

Indonesian pilots have also complained that the coronavirus has decreased their opportunities to practice their skills and refresh their training. At one point during the pandemic, Sriwijaya was only operating five aircraft, Mr. Soejatman said, lowering crew morale.

At Indonesia’s National Transportation Safety Committee, investigators prepared for the grimly familiar task of finding out what went wrong in the nation’s skies.

“Whenever we hear this kind of news, we get ready,” Ony Suryo Wibowo, an investigator for the committee, said on Saturday. “We are gathering all the information we can get.”

The country’s aviation safety commission said that it was on alert and that the transportation minister had gone to the international airport in Jakarta. Patrol boats combed the waters where the plane was believed to have crashed. “Whenever we hear this kind of news, we get ready,” Ony Suryo Wibowo, an investigator for the Indonesian National Transportation Safety Committee, said on Saturday. “We are gathering all the information we can get.”