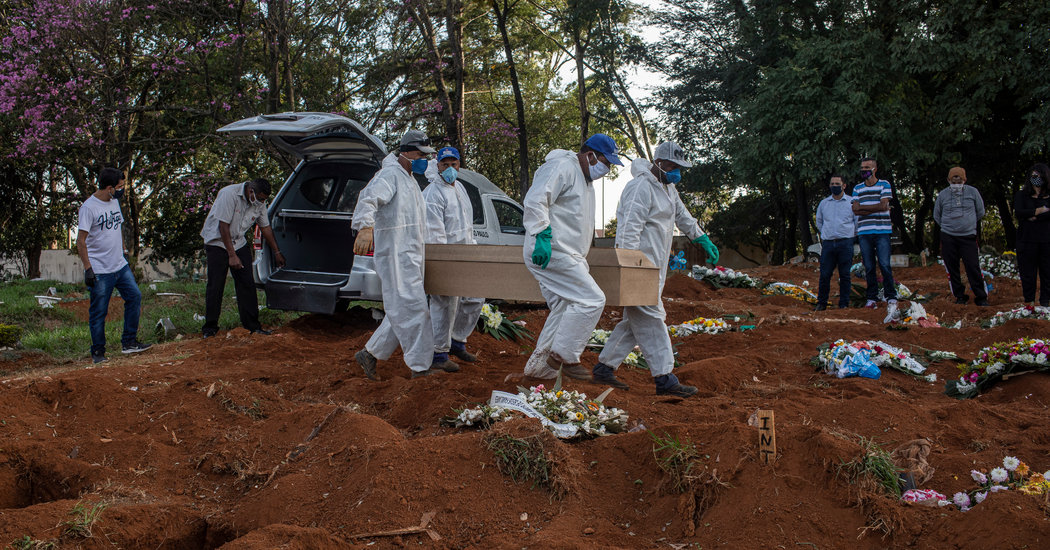 Brazil could have the world’s highest Covid-19 death toll by July.

Latin America became the epicenter of the coronavirus pandemic in late May, largely driven by Brazil’s ballooning caseload, as the number of infections in the United States and Europe fell.

In recent weeks, Brazil has reported upward of 1,000 new deaths a day from Covid-19, the disease caused by the coronavirus, eclipsing the death toll in every country other than the United States. On June 19, the country reported 54,771 new cases, the biggest one-day total for any country hit by the pandemic. If the trend lines hold, some epidemiologists project the death toll of the epidemic in Brazil could surpass that in the United States by late July.

The country’s response to the crisis has been widely criticized at home and abroad. President Jair Bolsonaro has dismissed the danger posed by the virus, sabotaged quarantine measures adopted at the state level and called on Brazilians to continue working to keep the economy from collapsing.

Even as the country’s coronavirus crisis worsened in recent weeks, some major cities eased preventive measures in mid-June. Shopping malls have begun to reopen in São Paulo and Rio de Janeiro. Beaches are starting to draw crowds again, even as some hospital systems are close to running out of intensive care beds.

Brazil declared a public health emergency in early March, just a few days after the World Health Organization did. The Ministry of Health urged state officials to cancel public events and put social-distancing measures in place.

Some experts thought Brazil was well equipped to rise to the challenge, based on its track record during past public health emergencies. Brazil had months to study the responses of the first countries hit by the virus, and it has a public health care system that, while underfunded, provides robust coverage across the country.

But the country’s response quickly went awry, with efforts by state governments to combat the virus often at odds with the positions adopted by the president. Mr. Bolsonaro pressured public health officials to do away with social distancing recommendations, calling Covid-19 a “cold.” He touted the use of hydroxychloroquine as the solution to the crisis. On Monday, the U.S. Food and Drug Administration said it was revoking emergency authorization of the drug to treat Covid-19 in hospitalized patients, saying that it and chloroquine are “unlikely to be effective” and could carry potential risks.

Mr. Bolsonaro’s cavalier response to the pandemic pitted him against governors and against officials at the Ministry of Health, who were urging people to stay home to the extent possible. Two health ministers left after clashes with Mr. Bolsonaro, one fired and one quitting, leaving a military general with no public health training in charge of the response.

The conflicting messages from the government, experts say, left Brazilians uncertain about the merits of isolation measures, which led to low compliance. That in turn led to Brazil’s contagion rate being one of the highest in the world.

What is the country doing to fight the outbreak?

The Ministry of Health has yet to present a comprehensive plan to fight the virus. One of its main initiatives has been boosting the production of hydroxychloroquine and encouraging doctors in the public health care system to prescribe it.

Brazil has struggled to import essential and lifesaving equipment, like coronavirus tests and ventilators. The lack of tests has made it difficult for officials to understand in real time where and how fast the virus is spreading. Experts believe Brazil’s official coronavirus figures significantly undercount the scope of the problem.

Between Jan. 1 and June 6, 23,171 people who were not diagnosed with the coronavirus died from acute respiratory infections, according to data released by Fiocruz, one of Brazil’s state-run health research institutes. Experts believe most of them died from Covid-19.

To ease the economic pain, Brazil offered three monthly installments of $120 to $240 to people who lost their income as a result of the pandemic. That program has been marred by widespread allegations of fraud and by the difficulty many eligible people experienced in accessing the funds. It is unclear whether there will be additional payments.

What have been the consequences of Brazil’s response?

Brazil’s chaotic response has deepened political polarization among supporters and critics of the president. Hospital systems have largely coped with the crush of patients, but the virus has taken a devastating toll on health care workers. Dozens of nurses and hospital technicians have died after contracting the virus at work.

In the deeply unequal country, some groups have been hit worse than others. According to a United Nations report, black people in the state of São Paulo are 62 percent more likely to die from the virus than white people.

Poor Brazilians who get sick are less likely to receive high quality health care. Although most public hospitals are operating near full capacity, several private hospitals have plenty of room to spare. The death rate in poorer cities has been substantially higher than the rate in rich ones.

The pandemic has exacerbated several of Brazil’s chronic problems. Deforestation in the Amazon rainforest has surged, and the police have continued killing scores of people in Rio de Janeiro’s low-income communities.

Brazil’s economy is expected to contract by 8 percent this year, and capital flight is reaching levels not seen since the 1990s, when the country was grappling with hyperinflation.

And as Brazil reels from its worst crisis in decades, Mr. Bolsonaro and his allies are using the prospect of military intervention to protect his grip on power.

Have there been any recent positive developments?

There are some signs that the outbreak in Brazil is starting to stabilize. A study by the Imperial College London estimated that Brazil’s contagion rate reached 1.05 this week, down from 2.8 in April. The current rate means every 100 people who are contaminated infect another 105. The outbreak is only considered to be under control when the contagion rate is bellow 1.

“The rise is not as exponential as it was previously,” Michael Ryan, the World Health Organization’s executive director, told reporters on Wednesday. “[But] the disease can take off again.”