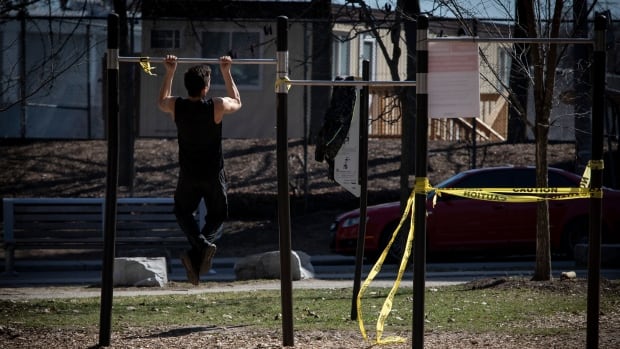 Did you linger too long on a bench, use a chin-up bar in a public park or run your dog off-leash and now have a hefty ticket for breaking physical distancing rules? Some lawyers say you shouldn’t be in a rush to pay it and may instead want to test that fine in court.

Municipalities across Ontario, Quebec and Nova Scotia are handing out large fines for violations of lockdown measures, but some legal experts are raising concerns about the lack of clear rules around what’s not allowed, the broad discretion given to police and bylaw officers to interpret those rules and the lack of a dispute mechanism since courts handling provincial offences are closed.

“If you are going to create new offences, you need to get the infrastructure in place for people to challenge them before you start handing out tickets,” said Cara Zwibel, a lawyer with the Canadian Civil Liberties Association (CCLA).

Usually, someone receiving a ticket in Ontario has to either pay it or signal their intention to dispute it within 15 days. But provincial offences courts have been shut down because of the COVID-19 outbreak, and those deadlines have been suspended. Deadlines have similarly been suspended in Quebec. So if you get a ticket right now, you can wait until court offices reopen to ask for an opportunity to fight it.

“At a minimum, I think what they need to do is possibly attach something to the ticket stub that makes that clear,” Zwibel said. “I think even verbally officers should be telling people that there’s nothing they need to do with this ticket until the state of emergency has been lifted.”

Neha Chugh, a lawyer in Cornwall, Ont., has been watching the enforcement actions closely. Her law firm is offering pro bono legal help to local residents who have received lockdown-related tickets.

Her advice to people who have been ticketed: Document your experience and wait to pay the fine, because it’s not yet clear how these tickets will be disputed.

William Vogelsang, 17, says he was nervous and embarrassed after getting a ticket for playing basketball by himself at an outdoor court at Eva James Memorial Centre. 2:01

“I don’t know how the courts are going to receive defences; this is a new area of law which is unique to COVID,” she said.

She suggests that when the courts reopen: “Attend, speak to the prosecutor, get your disclosure, get evidence, review it for yourself, see if it aligns with your memory of the day.”

Chugh said that while it would be ideal to get the advice of a lawyer or paralegal, that may not be an option for everyone. But while navigating the court system can be intimidating, the justices of the peace who oversee provincial offences courts are trained to assist self-represented people.

When the time comes, it’s possible tickets could be challenged under various grounds, such as arguing an infraction happened due to necessity, or that it was done unintentionally or with a lack of knowledge of the rules. It would be up to the courts to decide what’s acceptable as a defence. Chugh said because the laws are untested, it is doubly important to document everything, because it is not known yet which details will be relevant or acceptable as a defence.

The tickets being handed out are provincial offences that don’t result in a criminal record, but the fines vary. Most fines issued in Quebec are for $1,546, while in Ontario it’s $880.

In contrast, provinces such as B.C. are not ticketing people, preferring instead to use public education to encourage physical distancing.

A project called Policing the Pandemic is tracking the number of lockdown-related tickets being handed out across the country. According to its database, about 3,030 tickets have been issued in Quebec, 910 in Ontario and 500 in Nova Scotia.

The CCLA has asked people who have received tickets related to COVID-19 measures to submit an online form detailing the experience, in a bid to collect information on how, where, and against whom the rules are being enforced across the country. They have also called on the Ontario government to clarify the dispute mechanism for tickets and make that information more easily available to people who are fined.

Dylan Finlay, a Toronto criminal lawyer, was ticketed for briefly using a chin-up bar while jogging through Centennial Park in Etobicoke. He said there were no signs at the time saying that the chin-up bar was off-limits, and the park was open for people to walk or jog through. Finlay says that with multiple levels of government rolling out new emergency orders, it is difficult for people to keep track of the rules they have to follow.

“We are asking the citizen to stay informed of three levels of overlapping regulations that are changing every day. It’s hard to do,” Finlay said. “If I’m a criminal defence lawyer and I made a mistake, I’m sure others out there can make a mistake, as well.”

Finlay received a ticket for $880 and says he intends to fight it. He has not decided precisely what grounds he’ll cite to challenge it, but one defence could be arguing he used due diligence, such as looking for signs and not seeing any.

“Really, informing people what they don’t want them to do, I think, works just as well as fining them after the fact — in fact, better,” he said.

The Dream Speaks Out Following Backlash Over Resurfaced Clip From