RCB stalwarts Virat Kohli and AB de Villiers on Friday declared in unison that they had no intention of leaving the side for as long as they play the IPL. 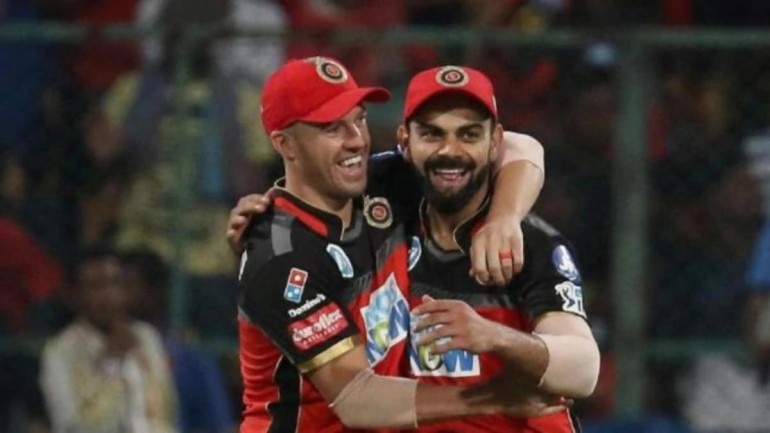 Virat Kohli and AB de Villiers – long-time friends and teammates at Indian Premier League (IPL) franchise Royal Challengers Bangalore (RCB) revealed their great admiration and love for the side even as the tournament itself has failed to get underway in its 2020 edition due to the coronavirus lockdown in the country. Chatting during an Instagram Live session on Friday, Kohli declared that he has no intention of leaving the black and maroon franchise with AB seconding him with a twist.

“It’s been 12 years and it’s such an amazing journey, so surreal. You have been here 9 years yourself. For a lot of people, it’s all about obviously we want to achieve the ultimate goal for RCB. We have come close thrice but haven’t made it. That’s always gonna be our dream together and I was just thinking there is no way in any scenario that I can ever think of leaving this team. Because of the love and care, the franchise has shown. You can feel emotional about the season going well or not but to have that loyalty with Bangalore, with RCB its quite surreal. Till the time I play IPL, regardless of how we play, I’ll never leave this team,” said Kohli.

In response, AB joked that Kohli, of course, has the luxury of a safe place in the side which is not the case with the others like him who have to continuously perform in order to retain their berth in the squad.

“Not everyone is as sure of staying in the side as you are (laughs). They have certainly been my inspiration for quite a few years now. I never want to leave Bangalore but I know I have to score runs if I wanna stay in the side. That’s really pushed me and obviously the fans but every time I look back at playing in IPL or South Africa or any team for that matter, you think of relationships and friends. You think about special moments, the crowd atmosphere. Those are the things you never wanna give away. I want to be in Bangalore for I dunno how many years to come,” responded de Villiers.

Kohli and de Villiers also dwelt on the current coronavirus crisis with the Indian captain pointing out that the time in confinement has put a lot of things in perspective for him. Both the players also agreed that a lot of things will not remain the same whenever things get back to normal.

“I am quite optimistic that at some stage we will definitely have something because things are moving in the right direction. When things are back to normal, I don’t see things getting back to like they were before everything happened. I think there are gonna be a lot of changes. A lot of discipline has to be shown by people everywhere. What I have seen in this phase is there are a lot of times when you get egoistic and you think ‘I’m doing this and I’m doing that’ but in reality, you are controlling nothing,” said Kohli.

“No one can do anything in the current situation. We all have to swallow our ego, follow what’s being told, and just be grateful for life. Try and help those who are in need. It really puts things in perspective when you don’t have control over anything. I think its drastically gonna change the enjoyment part of things for a lot of people. People are gonna stop being so serious about their own games or results. Pure love for everything is really gonna come up I guess,” added Kohli.

Dave Prowse, the British actor who gave the imposing physical presence — but not the voice — to Darth Vader