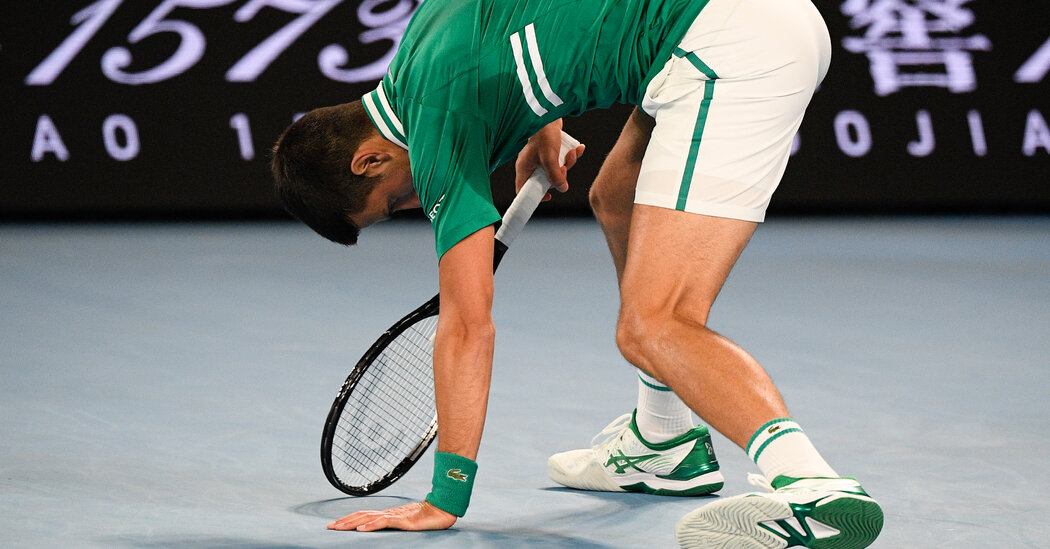 MELBOURNE, Australia — Novak Djokovic, the reigning champion at the Australian Open and the top-ranked player in the world, escaped an upset on Friday night to Taylor Fritz of the United States after hurting the right side of his midsection.

Djokovic, who has not lost at this tournament when seeded No. 1, was injured in a bizarre match during which thousands of spectators were sent out of Rod Laver Arena as midnight approached because of a government-imposed coronavirus lockdown in the state of Victoria.

Djokovic appeared in control of the match when he won the first two sets. Then he faltered badly as he battled what he described as a torn muscle in the right side of his abdomen but somehow sneaked past Fritz, 7-6 (1), 6-4, 3-6, 4-6, 6-2.

Djokovic is scheduled to face Milos Raonic of Canada in the fourth round on Sunday. Raonic will bring one of the biggest serves in tennis to a match that could present Djokovic, if he plays, with one of his biggest challenges since he started dominating on the hardcourts in Australia.

For Djokovic, a 17-time Grand Slam champion, a loss would have brought a third straight major tournament that ended in disappointment. He was defaulted out of the United States Open in September when he swatted a ball and accidentally hit a line judge. In October, he lost badly to Rafael Nadal in the French Open final.

He came to Australia in search of his championship form, though he pulled out of an exhibition in Adelaide with bad blister on his hand. Still, he breezed through his first-round match against Jeremy Chardy of France in 91 minutes.

In the second round though, he was pushed to the limit against Frances Tiafoe of the United States, who stretched him to four sets over three-and-half-hours on a steamy afternoon, even though Djokovic served 26 aces. Like a prize fighter jabbing at a cut, Tiafoe saw Djokovic struggling to reach wide forehands and continually forced him to stretch to his right.

Still, he gave no hint that he was in any kind of significant distress after the match and entered the night against Fritz, who is from San Diego, as a heavy favorite.

Djokovic predicted he might be in for a long night, however, especially on a court he described as the fastest he has ever played on at the Australian Open against a young player with a big serve and a powerful forehand.

Early in the third set, he appeared to slip, irritating the muscle on his right side. He said he felt a tear.

He took a medical timeout and took the maximum allowable amount of anti-inflammatory medication.

As the match continued, it was clear he was still having trouble changing direction or stretching for balls that were far away. Djokovic began massaging his side during every game and changeover. He said near the end of the fourth set, the medication began to work and somehow he became comfortable enough for a final push in the fifth set. He stayed aggressive on his second serve and began whipping his signature angled forehands.

“I honestly don’t know how I won this match,” he said. “I am very proud and at the same time sad and worried because there is definitely something serious happening with my injury and I don’t have much time to recover.”