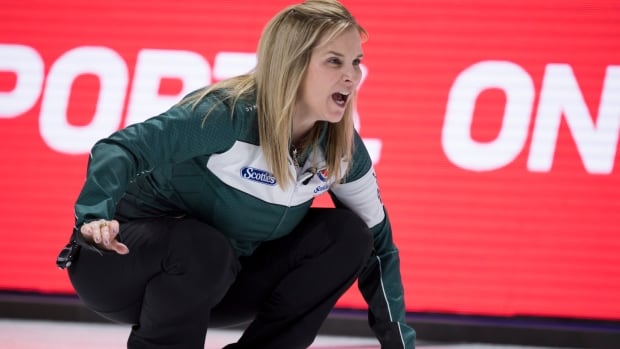 The time was right for Lisa Weagle to join forces with Olympic champion Jennifer Jones.

Ahead of their stunning alliance in mid-March, the Jones rink had contemplated levelling up to a five-person team. While rare, Jones thought the extra person could help if any curler in the rink became pregnant or injured. It would also mean you’d already know and would’ve already played with the fifth that’s required if you qualify for the Olympics.

Meanwhile, Weagle was completing her first-team all-star appearance as the lead for Team Rachel Homan at the 2020 Scotties. The rink finished second. Still, less than one month later, Homan informed Weagle that their 11-year partnership was over.

“It was like the clouds parted and the sun came out and it was this moment,” Jones told CBC Sports’ Anastasia Bucsis on Tuesday. Jones will be featured on the of the Player’s Own Voice podcast, which begins its third season May 12.

On Instagram Live with Devin Heroux, the curler explains how being a lead is an art form, and how making too many changes doesn’t necessarily improve your team. 2:30

Still, Jones said it took just one conversation to know Weagle, the 35-year-old Ottawa native, would be a good fit.

“She is just salt of the earth, great human being, super smart, very intuitive about curling, great work ethic, great teammate,” Jones said. “I can’t really say enough good things about her and it’s only been a few weeks and we’ve never been on the ice together.”

As for the dynamic of a five-person team, Jones said she hopes it evolves, given the main purpose of having that safety net is to prepare for the unforeseen.

“I think you’re gonna see more and more teams try to have like a five-man team where you rotate players and try to save some body parts and some injuries and make sure that you’re healthy going into your biggest events,” Jones said.

With more games being added to the August-through-May curling schedule, the physical brunt a curlers’ body takes has never been greater.

‘I don’t think it’s going to be awkward’

Weagle was with Team Homan for their appearance at the 2018 Olympics, a world championships victory and three Scotties titles.

It took her less than a week after being cut to find a new home with Jones.

“This is a really established team with such an amazing competitive resume,” Weagle told The Canadian Press in March. “I knew that if I was going to play, I wanted it to be for a team that had the potential to win. I want to win another Scotties and I want to win the trials and go back to the Olympics.

“I’m not afraid to say that and neither is Jen. That was a big part of my decision.”

With Olympic trials approaching toward the end of 2021, Canadian rinks have made more moves than ever to assure each is fielding the best possible squad.

But with the sports world shut down because of the pandemic, all the newly formed teams can do now is wait.

And when curlers finally do make it back to the rink, it won’t be long before the curling world savours a much-anticipated Jones vs. Homan showdown.

“We’re an amateur sport and we all get along well — like we see each other week in, week out — so I don’t think it’s going to be awkward and I think Lisa will be fine,” Jones said.

“I still think she’ll wanna beat them when we play them now that she’s on Team Jones.”