Chelsea could have moved into third spot and taken a huge step towards ensuring a Champions League berth with a victory but instead are fourth and are only two points above in-form Manchester United. 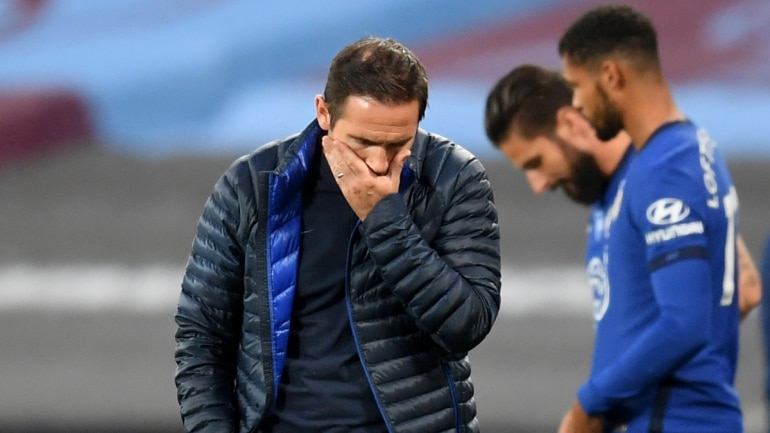 Lampard’s side dominated for long periods but were stunned late on when Andriy Yarmolenko slotted home an 89th-minute winner following a counter-attack by the home side.

Chelsea could have moved into third spot and taken a huge step towards ensuring a Champions League berth with a victory but instead are fourth and are only two points above in-form Manchester United and Wolverhampton Wanderers.

“It happens, it is the Premier League … we dominated the game in terms of possession, but make mistakes and teams will hurt you,” Lampard said. “I’m not happy with any of the goals.

“There were details in the game which we knew, but we lost because we didn’t get them right.”

It is why we are fighting for top 4 and not top one or two: Lampard

After beating Manchester City last week and then winning at Leicester City at the weekend to reach the FA Cup semi-finals, Chelsea were in a buoyant mood ahead of the derby.

But their fine run since the resumption of the season came to a shuddering halt as they suffered a second league defeat of the season against lowly West Ham.

Willian gave them the lead from the penalty spot but goals by Tomas Soucek and Michail Antonio either side of the break put West Ham ahead, before Willian’s sweet free kick levelled it up.

Chelsea were pushing for a winner when they were caught out by substitute Yarmolenko.

“It is why we are fighting for top four not one or two, because we don’t get things right as much as the big boys do,” Lampard said.

“I am not happy with tonight but at the same time we are two points ahead of Manchester United, who have been going great for some time.

“I think at times we have played really well this season. As a group we need to find more consistency.”

‘Made in Italy’ Review: Father and Son Reunion

‘Stanley Kubrick,’ a Brisk New Biography of a Major Talent