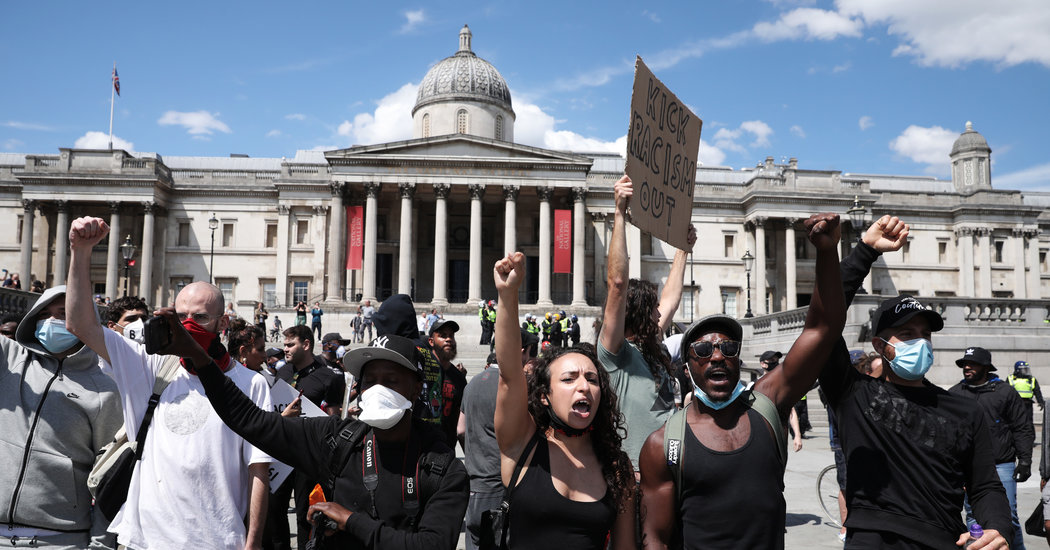 
LONDON — Thousands of people rallied against police brutality and racism in European cities like London and Paris on Saturday, punctuating a week of protests across the continent that included destruction of statues linked to slavery and demands for a reckoning with racial discrimination.

As European protesters have shown solidarity with demonstrators in the United States in the aftermath of the police killing of George Floyd in Minneapolis last month, they have also denounced their own countries’ problems and urged the authorities to address them.

But even as protesters gathered en masse to demand stronger measures against racism, far-right groups and protesters have fiercely pushed back, leading to chaotic episodes of violence on Saturday.

The situation grew especially tense in London, where crowds of white male counterprotestors clashed repeatedly with the police, who had imposed restrictions on the marches because of concerns about the potential for violent exchanges with supporters of the Black Lives Matter movement and left-wing causes.

The protest and counterprotest came to an explosive head in Trafalgar Square, when small numbers of Black Lives Matter supporters and their antagonists threw bottles and booming fireworks against one another, while the police tried to separate them.

Parliament Square, where thousands of Black Lives Matter protesters had gathered just a week ago, was filled on Saturday with hundreds of overwhelmingly white male counterdemonstrators. Many said they had assembled to prevent attacks targeting the statues in the square, especially that of Winston Churchill.

“People are defacing my history and my culture,” said Dave Allen, a 30-year-old lawyer from London who had joined the counterprotest. “That’s why these people are here, because we feel we’re getting attacked.”

Videos shared on social media showed mounted police officers standing guard in Parliament Square in front of boarded-up statues, while protesters threatened and punched officers who tried to repel them.

The confrontations in London came days after protesters tore down a statue of Edward Colston, a 17th-century slave trader, in Bristol, and others scrawled “racist” on a Churchill statue in Parliament Square.

The statue of Churchill, a usually revered figure in Britain who steered the country through World War II, was later covered to protect it. Prime Minister Boris Johnson called the episode “absurd and shameful.”

In Paris, some 15,000 people rallied to demand justice for Adama Traoré, a 24-year-old who died in 2016 after the police had arrested him. Amid the overwhelmingly young crowds, demonstrators waved signs reading “No justice, no peace” and “Black Lives Matter,” less than two weeks after 20,000 protesters had assembled in front of a Paris court for Mr. Traoré. The Saturday protests were organized by “The Truth For Adama,” an advocacy group led by Mr. Traoré’s sister, Assa Traoré. The rally remained largely peaceful, although police officers threw tear gas and clashed with protesters in the late afternoon.

“In France, we have a tendency to deny thorny issues like race,” said Isabelle Blanche, a 41-year-old black protester who came with her brother. She said that it had taken Mr. Floyd’s death in the United States “for people to finally wake up.”

Wearing a black T-shirt bearing the inscription “Justice for Adama,” Océane Loimon, 18, blamed the French authorities for refusing to address police brutality, but as she pointed to the crowds on the plaza, she said: “They cannot ignore it anymore.”

As in London, the atmosphere in Paris had grown tense earlier in the afternoon when far-right activists unfurled a large red banner reading “White Lives Matter” on the roof of a building of the plaza. The crowd below chanted “No justice, no peace,” in response, and later cheered residents who tore down the lower part of the banner with chisels and knives. Some threw fireworks at the far-right activists, who were later chased off the roof by a handful of protesters.

Similar protests in Lyon ended in confrontations with the police, who fired tear gas in response to protesters who threw bottles and stones at them, according to local media reports.

Demonstrations were also called for in Germany, although gatherings planned across the country on Saturday were to be much smaller than those of previous weekends.

Across Europe, governments have walked a thin line throughout the week in trying to quell public anger while doing little to acknowledge signs of systemic racism.

The leader of a German opposition party, the Greens, has called for a change of wording in the country’s Constitution to include a provision that no one should face discrimination on the grounds of “racism.” Chancellor Angela Merkel and her justice minister signaled this week that they would be open to a public debate on the change, which would require support from two-thirds of Parliament.

But the authorities have otherwise urged people to avoid protesting and to stay home in order to prevent the spread of the coronavirus, which has killed more than 167,000 people in Western Europe and dragged the continent into its worst economic slump since World War II.

The police in Paris reminded the public that gatherings of more than 10 people remained forbidden, and they asked businesses and restaurants to close near the Place de la République, where thousands remained on Saturday in defiance of the police barricades leading to the plaza.

Many protesters were unfazed by the warnings. “I’m less afraid of the coronavirus than I’m afraid of being killed by the police,” said Cécilia Ranguin, a 20-year-old law student, who is black.

Saturday evening, France’s highest administrative court, the Conseil d’Etat, reestablished the right to protest, provided that protesters respect health measures like mask-wearing and social distancing and that the gathering does not exceed 5,000 people.

In London, the police urged people to avoid demonstrating in the city and set a 5 p.m. deadline for all protesters to leave the defined demonstration routes.

“I absolutely understand why people want to make their voices heard,” Bas Javid, the Metropolitan Police commander, said in a statement. “But the government direction is that we remain in a health pandemic, and people are asked not to gather in large groups.”

As the 5 p.m. curfew approached, the police were taking measures to ensure that the right-wing groups were kept separate from the Black Lives Matter protesters.

The presence of far-right counterprotesters on Saturday added a new layer of complexity to an already tense situation in Britain and France, where demonstrators’ demands have been met with resistance from police forces, who argue that instances of racism by their members have been isolated episodes.

Dialogue between protesters and the authorities in Europe has been infrequent. While demonstrators in Britain called on their country to acknowledge its racist and imperialist history, Mr. Johnson has accused those who wanted to remove statues of trying to “edit or censor our past.”

But there are also signs that politicians in Europe are heeding protesters’ calls.

Sibeth Ndiaye, a spokeswoman for France’s government, said on Saturday that the country had not brought an end to racism and that discrimination should be discussed more openly. In an opinion piece in the newspaper Le Monde, Ms. Ndiaye — who was born in Senegal and moved to France as a teenager — said the country needed to tackle “the reality of the suffering” that minorities endure.

As the protest neared a conclusion in Paris, protesters confronted police forces. “We are not afraid,” Ms. Traoré chanted, as the truck she stood on drove back to the center of the plaza, and parked in front of a cordon of armor-clad police forces.