Praveen Sharma, 26, (name changed on request) remembers his 57-year-old father’s last wish. It was to shave off his stubble. “My father was always clean shaven,” says Sharma from a quarantine centre in Howrah where he has been with his mother and sister since April 12. “He kept running his fingers through it and whispered that it was itchy. I had promised to shave it off once he returned from the hospital.” It wasn’t to be. Sharma’s father died of COVID-19 on April 14. He doesn’t know where his father was cremated. “My uncle and cousins were called to clear off the bills and from a distance they watched a couple of men in PPE (personal protective equipment) take the plastic-wrapped body away,” he says. “I don’t even know if they bathed him and made him wear new clothes for his last journey.”

The last journey now is a terribly lonely one for families. Death in the time of COVID-19 has necessitated that people stay apart at a time of profound grief. Many are not even allowed to see off their loved ones to the crematorium or the burial site, denying them the closure they desperately need. Social distancing measures ensure funerals are hasty affairs conducted with little, if any, family presence. “The regret I will live with is how we buried him,” says a man from Srinagar who lost his father. “Everything was done in a hurried way as if we wanted to get rid of him.” That only 10 people including the cleric could convene compounded his grief.

Fear of contracting the virus has resulted in unfortunate incidents in which the bodies of COVID-19 victims, including doctors who have died in the line of duty, have been denied a resting place. Like in the recent case of Dr Simon Hercules in Chennai whose family faced hostility from locals gathered at the Kilpauk cemetery. En route to another in Anna Nagar, the ambulance with Hercules’s body was attacked, forcing his wife and children to run. “He is in some distant graveyard all alone,” Anandi Simon, his wife, told India Today TV. In a similar case, after the death of Dr John L. Sailo Ryntathiang (see box), founder of Shillong’s Bethany Hospital and beloved for his charitable work, his family struggled for 36 hours to find a cemetery willing to take his body. 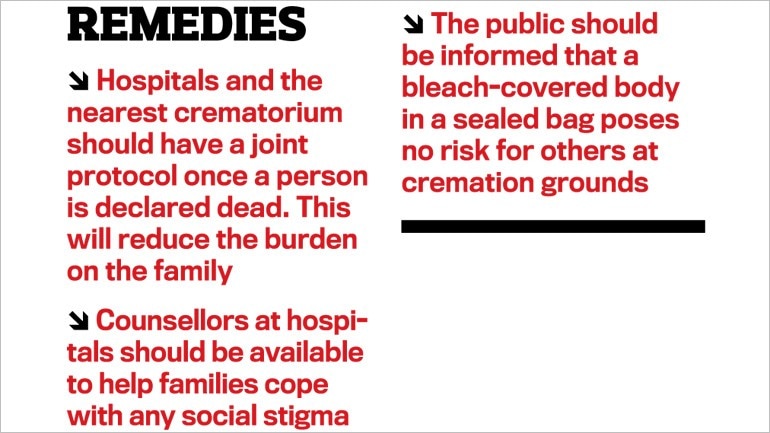 Much like the Ebola epidemic in West Africa which brought about a sea of change in burial traditions there, notably putting an end to the custom of touching the corpse, the contagious nature of COVID-19 has necessitated new protocols, overturning ancient Indian funeral practices. Proof now has to be given that the death was not caused by the virus. In Kashmir, newspapers now carry obituaries with a request to convey condolences over the phone. At the Tajganj crematorium in Agra, over 120 urns are waiting to be collected by families after the lockdown, to then be taken for immersion in the holy rivers. Even bier-makers are afraid to come to work. Gautam Pawar of Antim Sanskar Sewa, an organisation that manages the last rituals at a crematorium in Mumbai, worries that if the lockdown continues, there will be shortage of shrouds, bamboo and earthen pots. “We are giving sandalwood garlands right now instead of flowers,” he says.

The usually bustling Manikarnika and Harishchandra ghats in Varanasi now wear a deserted look. When once families from eastern Uttar Pradesh, Bihar and even from Nepal, would bring the bodies of their beloved here, the lockdown has brought down the numbers from 40-50 cremations daily to 10-12. “It is because of the government order asking people to cremate bodies at a place near their residence,” says Vishwanath Chaudhari of the Dom Raja family, under whose supervision the last rites are conducted. It’s a similar situation at the Daraganj or Rasoolabad cremation ghats in Prayagraj, which have been seeing fewer outsiders, and the Swarg Dwar cremation point in Puri, Odisha, where the number of bodies arriving has come down to single digits.

With supply chains obstructed, shortages are becoming a concern for cremation grounds, too. At the Bhainsakund ghat on the river Gomti in Lucknow, contractors are running out of pyre wood, which is making people choose electric cremations. Surya Vikram Singh of the Nagar Nigam at the Bhainsakund electric crematorium says 10-12 bodies are now cremated daily, up from three to four. This has led the Nagar Nigam to activate a second electric crematorium. The nagar ayukta, Indra Mani Tripathi, has ordered a new electric connection for the facility.

In some cases, mobile internet has come in handy for funerals. In Rajasthan, Kishan Maharaj, a priest in Bikaner, used WhatsApp video calling for the first time to perform the last rites, even though the deceased, Punam Chand Mali, 30, died of a non COVID-19 illness on April 10. “It was hard,” says Maharaj. “Everything had to be explained as to a child. But I had no option. To escape the clutches of the pandemic, I will follow what Modi says.”

In breaking traditional practices, the pandemic has also, in some cases, led people to find empathy and solidarity across religious divides. In Bhopal, when Shama Namdeo, 50, passed away from tuberculosis, her family was in dire straits. Her husband, Mohan, a chaat vendor and the sole bread earner of the family, felt helpless. “We did not know how to get my mother’s cremation done,” says Akash, Shama’s son. “People were suspicious and scared for their own lives.” When relatives said they could not make it for the cremation and friends were scared to attend the last rites, even though Shama’s death was not related to COVID-19, it was their neighbour Mohammed Shahid Khan, 43, who came to their rescue. Khan along with his son Adil and a few other neighbours collected about a dozen people and raised some money to purchase basic material required for the cremation. “Many in our locality felt they should not expose themselves to the body, but we decided to go ahead, following all precautions,” says Khan. “I could not have imagined a more difficult time, that even those who are dying are not getting enough people to carry their body for the funeral. I hope God is kind and this ends soon.”