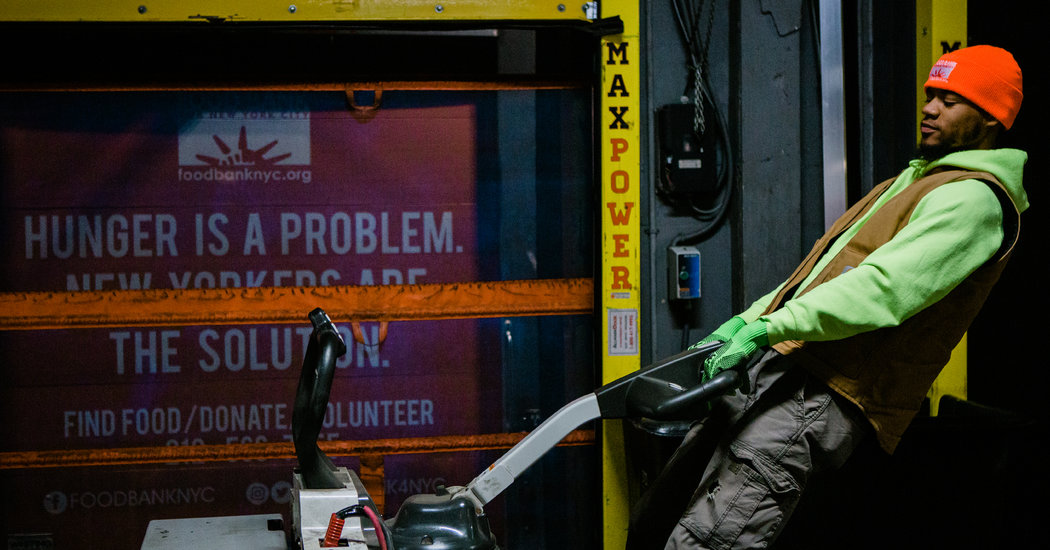 New York City’s pantries for low-income residents and meal-delivery services for shut-ins are dependent, now more than ever, on drivers who keep the food moving.

“A lot of my clients don’t get to interact with people unless it’s me,” said Mr. Gumbs, 48, who drove a school bus for 10 years before becoming a driver for God’s Love We Deliver (how to donate), which caters mostly to older New Yorkers. “Sometimes, they have no one to talk to.”

His conversations with them are shorter now, but just the sight of him — a glimpse from behind a window curtain, a peek through a peephole, the brief yet friendly exchange as he drops off a bag — is enough.

Herbert DeCordova, 91, a former chef and drummer, looks forward to Mr. Gumbs’s twice-a-week deliveries, when “all of a sudden,” Mr. DeCordova said excitedly, “the doorbell rings.”

Eric DeCordova, his son, said his wife works at a hospital; fearful of infecting his father, they have not seen him as often as they did before the pandemic. “This virus has torn us apart,” Eric DeCordova said.

Food — how to get it, how to deliver it, how to pay for it — has emerged as one of the biggest issues of the pandemic. Mayor Bill de Blasio has appointed a food czar. This month, the mayor and the City Council announced the city would give a $25 million emergency grant to nonprofit food providers to buy more goods.

Days later, Mr. de Blasio announced that the city would pour another $170 million into a broader food emergency effort, including hiring 11,000 taxi and ride-hailing drivers to deliver meals.

At the same time, the needy are finding that many food pantries and soup kitchens they are used to visiting have closed, because their volunteers, many of whom are retirees, are staying home to avoid becoming ill. About 40 percent of 800 sites supplied by City Harvest (how to donate) and Food Bank for New York City (how to donate) have shut down, leading to longer lines at the locations still open.

That has made people like Mr. Gumbs who deliver the food to pantries and to people stuck at home more essential than ever.

Mr. Smalls picks up donated food from restaurants and supermarkets and delivers to pantries and soup kitchens, and he has gotten to know some of their owners and workers.

Now he recognizes them by their voices, muffled under face masks, and by their eyes. They are all wary of standing too close but still welcome Mr. Smalls, knowing people depend on their food to survive.

The New York Times Neediest Cases Fund has begun a special Covid-19 relief campaign. All proceeds will go to nonprofits that provide assistance to those facing economic hardship. Make a tax-deductible donation via GoFundMe.

Mr. Smalls does not linger. He does not carry on small talk. “‘Hi’ and ‘bye,’” he said. “I’m more scared because I have asthma. I’m nervous because I take care of my father. He’s elderly, too. He goes to dialysis. I have to take care of him.”

One day this month his entire route was only New York City Housing Authority buildings. Food Bank and City Harvest are trying to serve residents in communities where the virus has created a food desert.

His first stop was the Bronx River Houses, a public housing development where some residents on top floors can see a narrow band of the waterway it is named after.

Norma Saunders, the resident association president, had been desperately calling elected officials in a search for food, especially for senior tenants who cannot go to the grocery store. “Around here, we don’t even have a supermarket,” said Ms. Saunders, 52. “It’s a bus ride away.”

She was happy to see Mr. Muhammad pull up with the tractor-trailer. “Thank you for doing this,” she said as he unloaded the truck, her mouth covered by a mask a resident had made for her.

Two days earlier, Mr. Muhammad’s first stop, at St. Luke’s Episcopal Church in the Bronx, had been a lot different. No one was there. He called someone, who explained that the pantry and soup kitchen were closed. “I’m not sure what happened,” he said.

Hours later, he learned what had happened: Donald Bookal, the longtime executive director of the church’s senior program, had died of complications from the coronavirus. To protect volunteers and the people served, the church decided to close the pantry.

“My dad was a part of that church for the better part of 50 years,” said Stephanie Bookal, his daughter. “He was like the backbone to the church. Nobody made any moves without consulting with him.”

He was in constant contact with the public; there was no sheltering in place for him. “He was all about service,” his daughter said.