Between January and March this year, a team of doctors at China’s Third People’s Hospital of Shenzhen performed convalescent blood plasma transfusion on five critically ill COVID-19 patients suffering from acute respiratory distress. With guarded optimism, the team spent the next few weeks studying the after-effects on the patients. To their delight, and the global medical fraternity’s interest, the results offered hope. Within 10 days of receiving plasma harvested from individuals previously cured of COVID-19, three of the five patients saw their condition improve and the viral load reduce. They were eventually discharged.

It’s still early days, but medical experts believe the Chinese experience has demonstrated that convalescent blood plasma therapy can help patients develop critical antibodies against COVID-19 which, as of April 22, had globally infected 2,585,193 people (19,818 in India) and claimed 179,838 lives (652 in India). About 55 per cent of our blood is a liquid called plasma; the rest are red blood cells, white blood cells and platelets suspended in the plasma. When plasma is harvested, the cells in it can be filtered through the machine and returned to the donor. It is then screened for other viruses before being declared safe for use. Plasma harvesting is estimated to cost hospitals around Rs 12,000-15,000 per donor. “We need to keep a gap of two weeks before harvesting plasma from the blood [of recovered patients] in order to ensure that no COVID cells remain,” says Dr Asha Kishore, director, Sree Chitra Tirunal Institute for Medical Sciences and Technology in Thiruvananthapuram. “By then, IgG (Immunoglobulin G) antibodies would have developed. These could help the next person build up similar antibodies against COVID-19.”

The efficacy and safety of this treatment is yet to be determined. That the Indian Council of Medical Research (ICMR), on April 18, won approval from the central drug regulator to start convalescent plasma transfusion trials in COVID patients is being seen as a major step towards understanding the full potential of this therapy. If it is shown to have desirable clinical results, the treatment can also be extended to those with moderate symptoms. At present, given the limited understanding, only severe COVID patients are eligible in the US and the UK. In India, it is yet to commence for any individual. Ninety-nine Indian institutes have volunteered to be part of the trials beginning April-end.

The treatments being explored may be based on limited studies, but a health emergency of this scale demands that no stone be left unturned. “Drug trials are happening worldwide at breakneck speed,” says Dr T.V. Narayana, president, Indian Pharmaceutical Association. The frantic search involves scanning thousands of existing molecules to find one that can cure or at least halt the onset of severe symptoms. New drugs, even with approvals fast-tracked, can take up to 12 years to develop, test and manufacture. Since a COVID vaccine is still a year away, repurposing old drugs appears to be our best bet in the short-term. “A new molecule needs to be heavily tested on cell cultures, animals and randomised groups of humans to ascertain how much of a compound is needed to inhibit an enzyme or kill a virus, how safe it is and what the side-effects are,” says Dr Ashutosh Kumar, assistant professor of pharmacology and toxicology at the National Institute of Pharmaceutical Education and Research in Hyderabad.

TOO EARLY TO CELEBRATE

Since its outbreak in Wuhan last December, COVID-19 has infected people in three ways, a few are asymptomatic, about 80 per cent have minor symptoms such as fever or cough, and the remaining suffer major respiratory illness or a cytokine storm, when the body’s own immune system damages organs. Given the differences in symptoms, a person’s immune system clearly has a crucial bearing on how the disease plays out. Taking note of it, ICMR, on April 21, invited fast-tracked research proposals for immunology-based approaches to preventing and curing COVID. Such research could shed light on a new line of treatment.

To aid the global hunt for a treatment, researchers in China, on April 9, published the structure of the M Protease of the virus. This has helped several research firms use computer-aided drug design and drug screening to identify existing drugs that can inhibit the enzyme. Antiviral drugs commonly target proteins, which are essential for viruses to synthesise proteins from human cells, a step needed for its replication. In the novel coronavirus, the two main proteins targeted by drugs are RNA-dependent RNA Polymerase and M Protease. Even though several drugs are being tested (from the Japanese influenza drug favipiravir to the epilepsy drug Valproic Acid), three remain the frontrunners in terms of the ongoing global trials, hydroxychloroquine (HCQ), lopinavir/ ritonavir and remdesivir. (Read The options against COVID-19)

These drugs are also the top ones being tested by the World Health Organization Global Solidarity Trial, a multi-country effort to kickstart drug trials against COVID-19. At present, the three drugs have only been studied in small groups. While early research seems promising, a controlled, double-blinded, randomised trial on a large group of people remains the gold standard to gauge the long-term efficacy and toxicity of a drug. The trial needs to include people of varying ages, stages of disease, gender, ethnicity, and so on. “To rule out any bias by the drug developer and the person tested, all trials should be random,” says Dr Kumar. “This means the tester does not know which person they are picking. The trials also need a placebo group, those not given the drug, to rule out false positive results.”

Remdesivir, developed in 2009 for Hepatitis C and then repurposed for Ebola in 2014 by US-based biopharma firm Gilead, is being touted as the most promising. This is largely based on an April 10 publication, in The New England Journal of Medicine (TNEJM), of a study of remdesivir administered to 53 severely afflicted COVID patients. The study says the condition of 68 per cent of the patients improved. But it is too small a sample. Two recent attempts at human trials in China have failed because of lack of enrolment. There are two ongoing phase 3 trials by Gilead.

HCQ, an antimalarial drug synthesised in the 1950s, was advocated by US president Donald Trump on the basis of two small studies in France and China. These showed the drug had antiviral properties and, along with azithromycin, reduced the COVID viral load. But neither study was randomised or large enough to offer conclusive proof. The biggest fear is the side-effects of HCQ, heart palpitation, permanent blindness, migraine and, in some cases, even death. Novartis, though, has announced human trials in the US.

The anti-HIV combination of lopinavir/ ritonavir is also being considered against COVID. Clinical trials on 199 patients at Wuhan’s Jin Yin-Tan Hospital saw the drug reduce symptoms rapidly. But research published in the TNEJM shows it did not improve clinical outcomes for patients. “Worldwide, there is endless drug gossip doing the rounds, one day, one study says a drug works, the next day, another says it does not. It is all too early and all too limited to definitely say which drug will defeat the COVID virus,” says Dr Narayana.

The results of human trials of the three drugs are expected in May-June. India is interested in joining the WHO trials, though it’s yet to do so formally. If a drug is found to have high efficacy against COVID-19, India will be in a good position to manufacture it. “We produce 60-80 per cent of the global supply of anti-malaria and anti-HIV medicines,” says Dr Narayana.

Where India could face problems is the pricing for drugs. In 2018, a research by the Public Health Foundation of India showed that 55 million Indians were pushed into poverty because of out-of-pocket payments for medicines. While patents for anti-malaria and anti-HIV drugs have expired, Gilead got the patent for remdesivir in India this February. ICMR has expressed interest in using remdesivir if local firms can produce it, and Gilead has announced plans to find an Indian partner. However, the pricing of the drug will remain in its hands.

Under Section 84 of The Patents Act of 1970, an Indian company seeking to market a drug it does not hold a patent for can apply for a compulsory licence, stating unmet demand, excessive pricing or lack of local manufacturing. But this won’t apply in the case of remdesivir as the drug patent needs to be held for three years before Section 84 can be applied. However, there are ways out of this. For instance, Section 92(3) of the act says the government can issue compulsory licences without hearing the patent holder during emergencies. “This is a critical time. Commercial players should not get to hold monopoly over essential drugs in a pandemic,” says Leena Meghaney, patent attorney and country head, Médecins Sans Frontières, an international medical humanitarian organisation. “If a drug becomes available to treat COVID, it must be priced reasonably and distributed equally.” 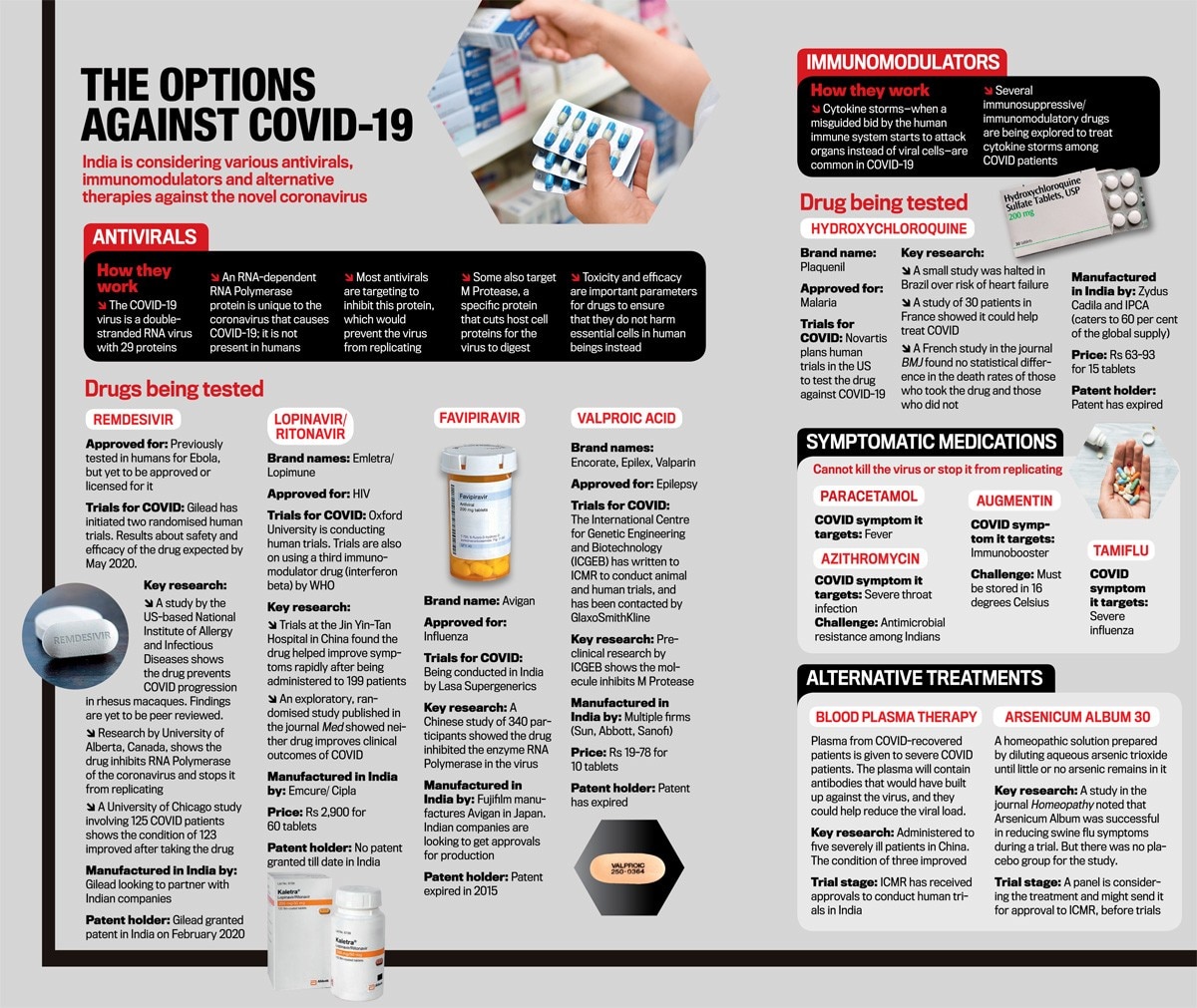 Allopathic cures aren’t the only options being considered against COVID-19. The ministry of AYUSH has sought suggestions from some 2,000 homeopathy and ayurveda doctors for alternative treatments. A task force has been set up to finalise a line of treatment and send to ICMR for approval. “China has been using traditional medicine along with allopathic drugs. Indian traditional cures do not just boost immunity but also have antiviral properties,” says Shripad Naik, Union minister of state for AYUSH.

A leading homeopathic drug being considered by AYUSH is Arsenicum Album with 30C potency. “Potencies are as per different stages of a disease, different age groups and different immunity levels. Homeopathy has over 4,000 remedies in its bank,” says Dr Ajit Kulkarni, a Pune-based homeopathic practitioner with 30 years of experience.

COVID-19 continues to kill people worldwide. With cases of relapse among the cured being reported from China and South Korea, WHO has issued a statement that the ‘worst is yet to come’. The next few weeks are critical, as results of large trials will show if any drug is on the horizon to give us reprieve from the deadly virus.