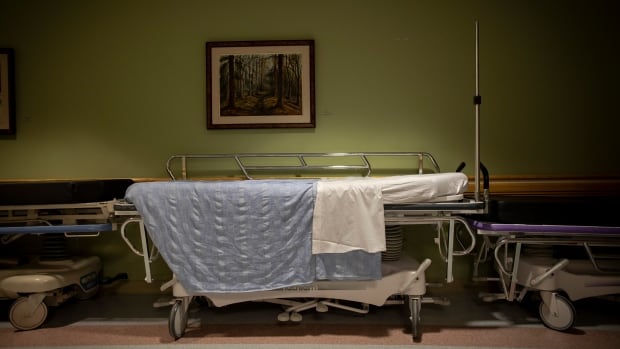 Although hospitals around Ontario are now allowed to resume non-emergency surgeries, many of them can’t, either because they’re too full or don’t have enough protective equipment.

Nearly all scheduled surgeries — including cancer surgeries, heart operations, organ transplants and hip replacements — have been postponed under a provincial order issued in March. The goal was to reduce the demands on hospitals and clear space for a feared wave of COVID-19 patients.

The government announced last week that those surgeries (often called elective to distinguish them from emergency surgeries) could resume. But this can happen only in hospitals that meet certain criteria.

Two criteria that are crucial:

“A large minority of hospitals” do not qualify, said Anthony Dale, president and CEO of the Ontario Hospital Association.

“I know of hospitals already approaching 100 per cent occupancy,” Dale said in an interview Friday.

“Why are we allowing hospital occupancy to rise again to very high levels?” he asked, adding that he is “extremely concerned that we’re sleepwalking into a situation that we can prevent If we take action now.”

Dozens of hospitals are currently registering occupancy rates above the 85 per cent mark, according to the association.

“Clearly this is a risky situation,” Dale said. “We have to be serious about the fact that the second wave [of the pandemic] is coming and we need to be prepared.”

He is calling on the province to find more space outside of hospital for patients who don’t need acute-care beds and to “redouble its efforts” in helping hospitals obtain PPE.

CBC News asked Health Minister Christine Elliott during a news conference Friday what the province will do to assist.

“There are a number of issues that need to be answered by each individual hospital before they’re able to resume scheduled procedures,” Elliot said, adding that several thousand surgeries have been delayed.

She said she knows that waiting is “extremely difficult” for people. “We want to start those procedures as soon as possible.”

The province “is continuing to work with hospitals to ensure a responsible and measured approach to ramping up scheduled surgeries,” added Elliott’s manager of media relations, Hayley Chazan, in a follow-up email on Friday.

The evidence from hospitals points to two main reasons why occupancy rates are creeping upward.

Emergency departments had witnessed a sharp drop in traffic after the pandemic was declared in March, likely heeding the advice to stay away from hospitals except in the most urgent cases. In recent weeks, people have resumed coming to the ER for medical issues unrelated to COVID-19.

Meanwhile, the novel coronavirus outbreaks that made long-term care homes inaccessible, combined with limits on the availability of home care during the pandemic, mean that fewer patients are being discharged from hospital than are being admitted.

Before the pandemic hit Ontario, about 5,200 hospital beds were occupied by patients designated as “alternate level of care” — people who no longer need to be in acute care, but don’t have adequate support at home.

Hospitals opened up space by moving out about 1,200 of those patients by early April, according to figures provided by the hospital association. Those same figures show roughly three-quarters of those freed-up beds have since been re-occupied by alternate-level-of-care patients.

“It’s a terrible dysfunction in our system and it risks being a deadly one if and when the pandemic surges again,” Dale said. “We have to wake up right now and prepare for that and take it seriously.”

The latest figures from Ontario’s Ministry of Health show 961 patients with confirmed cases of COVID-19 are currently hospitalized. That number has hovered around 1,000 since late April.

As for protective equipment, hospitals are facing “pretty significant and practical challenges around availability,” said Dale.

“I don’t think we’ve yet seen the domestic production increase to a level that can make a sizable dent in the demand.”