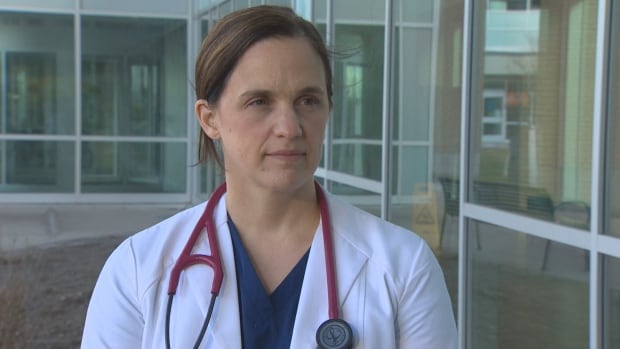 It was Saturday, April 18, just after 11 p.m., when the emergency physician got the call. There had been a shooting in nearby Portapique, N.S. There were multiple victims.

“As soon as we got the initial notification that we might be receiving patients, we jumped into action,” she said.

Sommers is the chief of the emergency department at the Colchester East Hants Health Centre, the hospital in Truro. It was one of four health centres locked down during the Nova Scotia shooting rampage that would leave 22 victims dead.

Sommers said staff are heartbroken, but their work responding to the fallout of that night is far from over.

Hospital staff have been reluctant to talk about what happened. Sommers said staff think their efforts pale in comparison to the hard work of RCMP members, Emergency Health Services and other first responders who were out in the field.

“We just want to acknowledge the sacrifices they have made,” she said.

Inside the hospital, those on duty found themselves in a remarkable position. They were dealing with a shooting and a pandemic at the same time.

“I never thought I would be using the knowledge gained in that exercise.” Sommers said.

A quiet night at first

By chance, some aspects of the double crisis worked in their favour.

There were three physicians on staff instead of the usual two because of COVID-19. There were about a dozen nurses in the department. The hospital was quiet, and it was a rare night with some empty beds.

The team called in a radiologist and surgeon. Employees from other parts of the hospital came to take on the emergency patients who were not connected to the shootings.

The Nova Scotia Health Authority won’t say how many victims were taken to each site.

In smaller locations, the fear is even the smallest detail could identify any patients, said Sommers. All she will say, is that they didn’t treat as many people as they expected.

“I’m not sure I can describe the stillness of an emergency department that’s waiting to receive victims that don’t come. It got emotional for sure.”

Sommers is from Truro and has been in the emergency department for 13 years. She said while they’ve dealt with major emergencies before, including the 1998 Swiss Air crash that killed 229 people in waters near Peggys Cove, this one is the hardest.

This act was intentional. Every employee has been affected by a loss.

“Because we care so much about those we serve, it was particularly painful,” Sommers said. “I don’t think any of us ever imagined that something like this would happen in our beautiful town.”

While the immediate crisis has ended, staff have seen patients in the emergency department who are traumatized. They expect that to continue for months.

Sommers urged people to reach out if they needed help or to call the provincial mobile crisis line.

“We are prepared for what is going to come through our door,” she said. “Despite being heartbroken about what’s happened, we’re here to serve the community in whatever way we can.”

Sommers said support has also been offered to her team.

“Some days are better than others for each of us,” she said.

“We have received condolences and messages of support from hospitals across the Maritimes and even across Canada. We would just like to say thank you for the support, it makes a big difference.”

If you are seeking mental health support during this time, here are resources available to Nova Scotians.