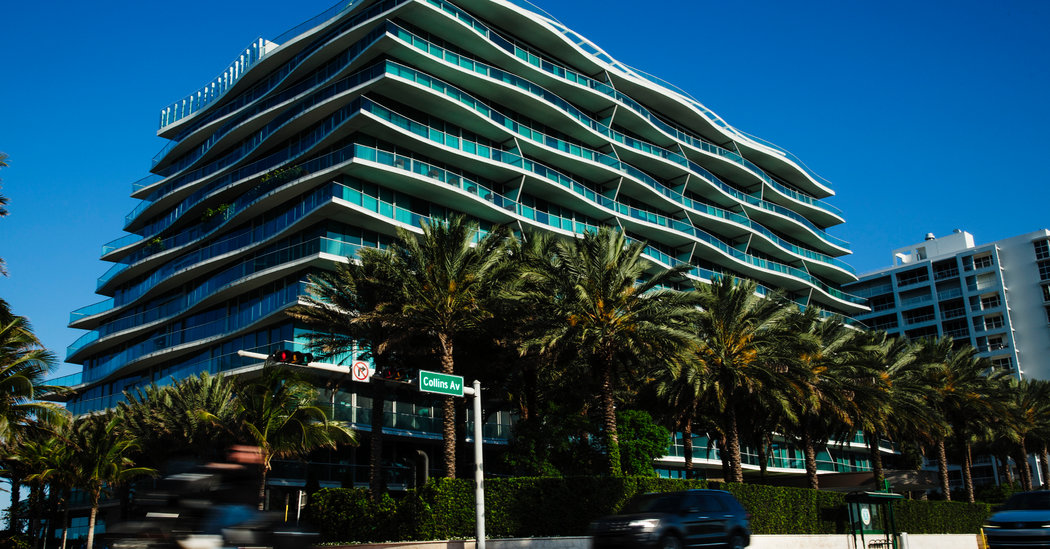 
Similarly, the lifestyle collection from the British sports-car maker Aston Martin is packed with sweaters, jackets and leather bags, so it may come as no surprise that the company is following Porche down the same track with a new 391-unit, 66-story condo.

Aston Martin Residences was developed through a partnership with G&G Business Developments, a firm tied to Argentina’s Coto family, owner of a supermarket chain. The condo, whose one-bedrooms start at $750,000, is expected to open in 2022. The building is 55 percent sold since in 2017, a spokesman said, for prices averaging $1,200 a square foot.

The condo, which has a protruding, semicircular edge, may recall the curvy lines of a coupe, but relevant interior detailing can seem minimal. Small versions of the Aston Martin logo appears on the handles of sliding doors in common areas, and lobby desks are made of carbon fiber, a car body material.

Along the same lines, it remains to be seen how wholeheartedly Missoni Baia, a 249-unit tower under construction in the Edgewater neighborhood, will embrace the fashion brand Missoni, an Italian label known for kaleidoscopic fabrics.

Renderings of the stark-white 57-story structure, which is being developed by OKO Group, OB Group and Cain International, reveal ground-floor columns imprinted with tie-dye-style patterns. The units, save for geometric upholstery, seem fairly conventional, at least in concept.

In the end, though, many buyers may not care if their living room has the provenance of a runway, some developers say.

“Fashion is almost a nonissue,” Mr. Dezer said. “What counts is a nice building.”