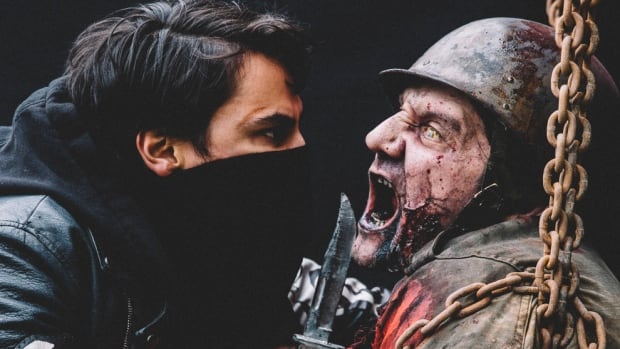 One of the most hotly anticipated Canadian horror films of the year will be available to watch online starting Tuesday, after its theatrical release was cancelled due to the COVID-19 pandemic.

Blood Quantum features a near all-Indigenous cast and is a gory, fast-paced movie about a fictional Mi’kmaq reserve facing a zombie outbreak.

Barnaby, who is Mi’kmaw from Listuguj, Que., has been making films for over 20 years. His debut feature film was Rhymes for Young Ghouls in 2013.

He started working on the script for Blood Quantum over 13 years ago and never expected a pandemic would affect its release.

In Blood Quantum, a zombie outbreak is taking place in the fictional Mi’kmaq reserve of Red Crow and Indigenous people are immune.

“The film wrote itself,” said Barnaby.

“People keep calling it a pressing film with all of the stuff happening now because of the virus. Meanwhile Native people have been putting up with it forever.”

Barnaby said the film also doubles as a metaphor for environmental catastrophe.

“The beginning of the film, the fish are coming back to life, the pollution is going directly to the water, then the water goes to the baby… the presentation is subtle,” said Barnaby.

Blood Quantum was produced by Elevation Pictures and had a $5.5 million budget. It screened at the Toronto International Film Festival last fall and was supposed to have a theatrical release this spring.

The film was shot in one month in Barnaby’s home community of Listuguj, in Kahnawake and in parts of Montreal.

When dreaming up scripts for his movies, Barnaby said that as a Mi’kmaw director he doesn’t have to worry about whether he is going to accurately portray Indigenous people in his films.

“If you’re a non-Native filmmaker and you are making a Native film, you are hyper aware of it,” he said.

“But if you’re from the community there’s nothing novel about seeing a bunch of Native people walking around being Native people.”

Tailfeathers, whose father is Sami and mother is Blackfoot from the Blood reserve, said the cast was loving and supportive.

“I’ve never laughed so much on set,” said Tailfeathers.

While the movie is a mixture of humour and zombie tropes, she said it has political messaging that Indigenous people can relate to.

“The film builds on this history of Indigenous people surviving the apocalypse and here we are in this serious time and we are reliving the past in some ways,” said Tailfeathers.

“I’m excited for indigenous communities to see this.”

The film will be available to rent or own on digital platforms in Canada on April 28.