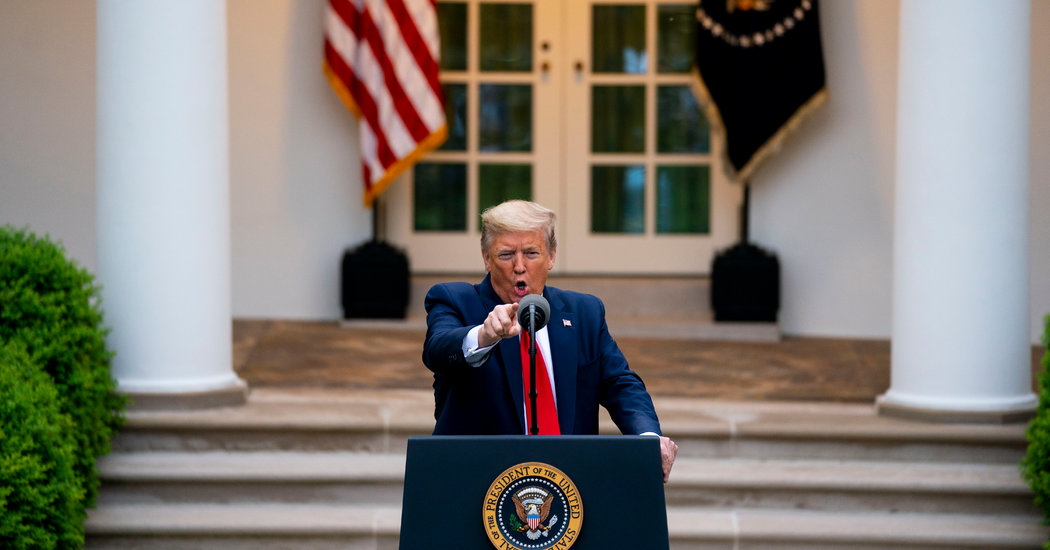 
Secretary of State Mike Pompeo is better known for yelling at journalists than consoling them.

But when Mr. Pompeo got on the phone with the publishers of The Washington Post, The Wall Street Journal and The New York Times on March 21, he said he was there to offer help, according to a person with direct knowledge of the call. And he acknowledged that the Trump administration’s latest shot at China had been, if not wrong, poorly timed.

That’s because on March 2 — a month after President Trump banned travel from China, and the day the number of confirmed coronavirus cases in the United States passed 100 — the State Department announced a long-planned expulsion of about 60 employees of five Chinese state media outlets working in the United States.

The U.S. move gave the Communist Party the perfect excuse to get rid of pesky American journalists who had, over the previous two months, offered the world a window into China’s deadly mistakes in responding to the outbreak of the virus. On March 17, China slammed that window shut, announcing the expulsion of reporters for The Washington Post, The Wall Street Journal and New York Times, and forcing the firing of Chinese nationals who worked for those outlets as well as for Voice of America and CNN.

“Given the fact that it’s vital to have good information out of China right now because of coronavirus, the U.S. decision was pretty disastrous timing,” said Megha Rajagopalan, a correspondent for BuzzFeed News whose visa was not renewed in 2018 after she reported about the mass internment of Muslims in China. Ms. Rajagopalan and other expelled reporters stressed, however, that the U.S. crackdown in no way compares with the brazen Chinese efforts to undermine a free media.

“The Chinese government is at fault, far and above the U.S. government,” she said.

A senior administration official, who explained the policy on the condition of anonymity after I reached out to the State Department, told me that the U.S. move had been on the wish list of American counterintelligence officials and China hawks, and was pursued “on a totally different track from coronavirus.” The official argued that even in early March, the virus was “not the all-consuming epidemic that it was now.”

But the ill-timed U.S. action underscores how slow the Trump administration was to recognize that the coronavirus would effectively be the most consuming issue this year. The United States made its point — but paid a big price for it. China lost reporters for low-impact state media outlets, while American citizens and leaders lost access to rare up-close reporting in an increasingly closed state.

The administration “didn’t really accomplish much,” said Marcus Brauchli, a former Wall Street Journal editor and former China correspondent. He said that he doubted the U.S. government had “better sources on the ground than the journalists who were expelled. So they just sacrificed one eye — for what?”

These questions are not easy ones. The rise of Xi Jinping’s authoritarianism in China is the story of a generation. The battle now is over who controls that story, and that battle has only intensified as citizens around the world try to understand the coronavirus crisis — and governments around the world try to deflect blame for the deep losses it has caused.

The status of foreign correspondents in China has been fraught since Mao Zedong established Communist rule in 1949 and tossed out the foreign correspondents. The country only let them back in the late 1970s, as my colleague Li Yuan wrote last month, though it still occasionally expelled particularly aggressive ones. (Chinese journalists continue to take far greater risks to report on their government.)

China’s openness peaked around the 2008 Olympics, and tensions over foreign correspondents have been rising since then. In 2013, after The Times reported that Bloomberg News had spiked a sensitive story involving the party elite and a Chinese tycoon, the Chinese government signaled that it would not renew visas for either outlet.

The logic at the time, said Ryan Hass, who was then the director for China on the National Security Council, was that “it’s pretty difficult to win a race to the bottom with the Chinese.”

This time around, the Trump administration has a broader goal of strengthening the U.S. position against China on all fronts, abandoning the once broadly held theory that China’s embrace of open markets and engagement with the West would ultimately lead it to adopt democratic values.

The president wants to rebalance the relationship, and one obvious imbalance is that Chinese journalists in the United States operate far more freely, and obtain visas more easily, than their American counterparts in China. And so the Trump administration began in 2019 by forcing state media employees to register as foreign agents.

Things escalated this year when, at a Feb. 24 meeting, Mr. Pompeo’s team proposed the expulsion of some Chinese state media staff members, said an official with knowledge of the meeting, who wasn’t authorized to discuss it.

The administration was trying to “stand up for the ability of American media outlets to keep reporting the news out of China,” Matthew Pottinger, the deputy national security adviser who is a former Wall Street Journal reporter, said on a call with journalists on March 2. (Reporters participated in the call on the condition they identify Mr. Pottinger only as a “senior administration official”; I wasn’t on the call, and a person with direct knowledge of it later identified Mr. Pottinger to me.)

China acted quickly, and its officials portrayed the expulsions as purely a reaction to the American move. “It was all initiated in the United States,” Cui Tiankai, China’s ambassador to the United States, said in an interview with GZero World. But the expulsions appear to have been long sought by China. And a commentary in the state-run Global Times confirmed that it was about the content of the reporting, citing coverage of the detentions of Muslim minorities in Xinjiang as well as reporting about the coronavirus as part of the government’s motivation.

U.S. officials acknowledge that they didn’t see the expulsions coming.

On the call with publishers, Mr. Pompeo offered to help. But there isn’t a clear path to persuading China — which has little interest in critical coverage — to stop whittling away at a foreign press corps that still includes dozens of U.S. journalists and a range of international media.

Now, the administration is considering its next step, which could be to expel specific Chinese journalists it views as spies, Edward Wong and Julian E. Barnes reported. Other ideas are also being discussed, said Michael Pillsbury, a Trump adviser and director of the Hudson Institute’s Center on Chinese Strategy, including whether Chinese access to the big American platforms of YouTube, Twitter and Facebook could be limited. (The platforms are blocked in China, but are powerful vehicles for Chinese propaganda globally.)

To read the coverage of the expelled reporters is to understand what is lost. Revelatory investigations in the Times, Post and Journal exposed Chinese government mistakes and cover-ups as the coronavirus spread.

Other articles simply let American readers “identify with Chinese pain,” as The Washington Post’s Emily Rauhala put it. There was The Wall Street Journal’s look at the chaos in a Wuhan hospital, Anna Fifield’s reporting in The Post on the suspicions of grieving families, Amy Qin’s portrait of a devastated family in The Times and the empathetic tweets by Chris Buckley of The Times.

Now, the U.S. and Chinese governments seem to be shifting their focus to the blame game. Mr. Pottinger has been pushing the plausible, but unproven theory that the pandemic started with an accident in a Chinese lab. The claim has entered the Washington spin cycle, with echoes of the run-up to the Iraq war. And the fewer independent American reporters there are working in Beijing, the more the China story may be shaped by U.S. officials.

The Chinese government “is going to discover the cost of not having a significant presence of reporters on the ground,” said Mr. Buckley, an Australian-born reporter for The Times, who was under quarantine in Wuhan when he was told he was being expelled. “The China story as a whole becomes even more hostage to these lurid representations and misrepresentations of the country that you would think the Chinese government would have some interests in allowing people to rebut.”

Meanwhile, a Chinese journalist in Washington told me that China Global Television Network already has a plan to replace the staff it sent home: They’ll hire some American journalists on contract to help with the propaganda broadcasts.

In this job market, they probably won’t be hard to find.