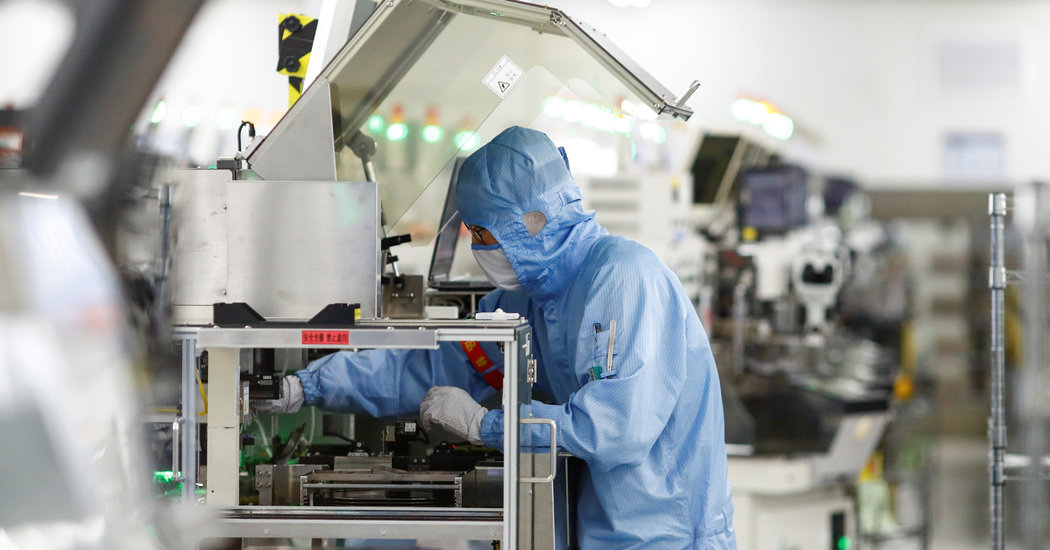 
“One of the biggest weaknesses in the American economy is the decline of our scientific and innovation industrial base, and we must invest in academic institutions and industries to rebuild it,” Mr. Schumer said. “There’s bipartisan support to do so and it’s growing each day.”

The shift in Congress mirrors one in the Trump administration, which has rejected traditional Republican support of free trade in favor of a more managed approach to compete with China. Mr. Trump’s advisers have zeroed in on the semiconductor industry, which was born in the United States but has partly migrated to Asia in recent decades, as the test case for their plan to use trade and technology policies to return manufacturing to American shores.

Though the election is fast approaching, officials in the Trump administration have only just begun to implement that plan. Over the last year, they have introduced a variety of measures aimed at cutting Chinese companies off from American technology exports and investment opportunities and crippling the Chinese telecom giant Huawei, which they view as a national security threat. Mr. Trump also waged a prolonged trade war against China — placing tariffs on hundreds of billions of dollars of Chinese goods, including high-tech ones — as he pressed the country to sign a so-called Phase 1 trade deal.

But the administration has done little to build up other companies that could compete with Huawei and other Chinese technology leaders. As a result, American efforts to get countries around the world to excise Huawei from their telecom networks have been largely unsuccessful.

For many months, officials in the Departments of Defense, State and Commerce have been trying to woo chip makers including Intel, Samsung and Taiwan Semiconductor Manufacturing Company to expand their manufacturing footprint in the United States. In May, T.S.M.C. announced plans to build an advanced chip facility in Arizona. That plan is contingent on securing funding from Congress, which would likely come through the bill introduced this week.

Officials from the Department of Commerce and State, who helped negotiate with T.S.M.C., have been in talks with Congress to create a standard package of incentives that could be offered to attract other chip suppliers. In a meeting at the White House last Thursday, senior officials discussed incentives that could bring chip manufacturers onshore.

Besides recent tensions with China, industry executives say the bipartisan support for the bill was also fueled by the coronavirus and its aftermath, which underscored the dangers of relying on a distant electronics supply chain.