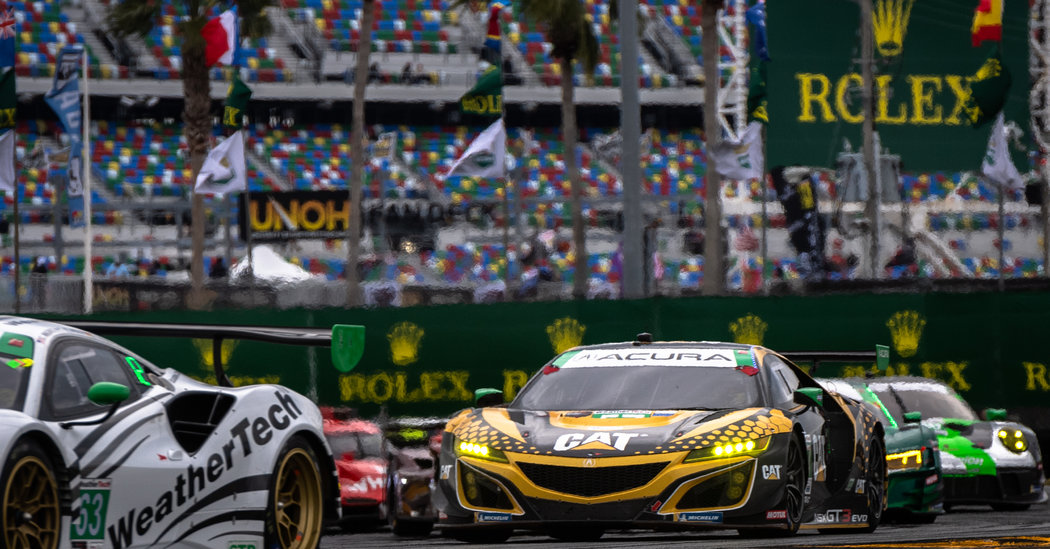 
They’re machines that exemplify precision and design, detailed craftsmanship, advanced technology. Both lean toward the macho, but you needn’t be macho to appreciate either of them. Cars and watches: They have evolved together for the last century or so.

Watches, like coveted cars, can be very expensive. A nice version of the Rolex GMT-Master clocks in at about $38,000. That’s cheap; the Kimi Raikkonen chronograph from the Richard Mille boutique is an out-of-this-world $1,063,000; that’ll buy 10 Porsche 911s.

For upscale show-offs, watches and cars are desirable, well, vehicles. Enthusiasts gather in a parking lot to fawn over a blood-orange Acura NSX two-seater; enthusiasts may also crowd around the wrist of a man wearing a piano-black Seiko Astron Honda NSX limited edition.

“A watch is like a sports car that you can wear into a bar,” said Matt Farah, a student of watch history in Los Angeles who produces a podcast, “The Smoking Tire.” “It’s OK to want to wear a trophy.”

“What’s undeniably alluring about cars and watches is the level of meticulous design, savoir-faire and engineering behind the manufacturing of both,” said Jack Heuer, the 87-year-old great-grandson of the founder of TAG Heuer (TAG stands for “the avant-garde”). “They are investments driven by passion and emotion in categories with longstanding history.”

A useful point of reference in chronicling the analogous history of cars and watches goes back to the middle of the 20th century, when the wives and girlfriends of racecar drivers sat by the pit wall, mechanical stopwatch in hand (often made by Heuer), to measure lap times.

Through the decades, many other Swiss watch firms, including Omega, Hublot and Longines, have had associations with Formula One and other motorsports. Today, there’s the Rolex 24 Hours of Daytona. The results are no longer monitored by stopwatches, determined instead by Rolex technology and “live timing” produced by the transponders attached to the cars and sophisticated receivers on the tracks.

And many watch makers have used racing personalities as well as celebrities as “ambassadors.” The Mercedes-AMG Petronas team driver Lewis Hamilton, a British six-time Formula One champion, isn’t shy about pulling up the sleeve of his flame-retardant suit to show off his IWC watch.

Implicit beyond the complex branding and marketing messages is “the metaphorical connection,” Mr. Farah said. “A car turns energy into motion, and all the things someone might find appealing about an engine you can find appealing about a watch. It has a power plant, or a movement. A transmission, the escapement. It is sometimes art, and always functional.”

Besides telling time, watches may mark indelible moments in an individual’s life, he said. Some watches carry their own stories. Consider the vintage Omega Speedmaster Professional: the “Moonwatch,” worn by the moon-walking astronauts of Apollo 11.

But assessing the investment value of a vintage watch or a vintage car — a popular pastime among aficionados — can be a tricky business. Supply, or lack of it, often dictates which models appreciate, and which lose value.

“Things can change very rapidly in the watch world, the way they can with other investments,” Daryn Schnipper of Sotheby’s international watch division told The New York Times in 2018.

In the long term for investors, Mr. Farah notes, “a stock can turn into zero.” So he advises: “Buy a decent watch or a nice car. The value may go up or down, but you’ll have that thing to use in the meantime, which is more enjoyable that watching a stock price.”

Here’s a look at some of the more fabulous timepieces with automotive legacies:

TAG Heuer Monaco. Google the Monaco and invariably up pops Steve McQueen. Mr. McQueen, as most racing followers know, wore the squared-off, blue-faced chronograph in the 1971 film “Le Mans,” and the rest is watch history. (Mr. Heuer, who designed the original Monaco, is credited with persuading Mr. McQueen to wear the watch in the movie.) The watch was unveiled at the Monaco Formula One Grand Prix two years earlier; it featured the innovative Calibre 11 movement, and was the first automatic-winding chronograph. Monacos of various colors and looks are ubiquitous on online watch outlets; the modern version from tagheuer.com is $6,150.

Junghans Meister Driver. Before there was a German automobile, there was a German watch. Junghans was born in the Black Forest in 1861 and was the largest clock manufacturer in the world by the turn of the century. Its modern watch designs are spare and have a Bauhaus aura. The handsome beige-and-gray Meister Driver mimics the look of an instrument dashboard dial. It’s not for the lazy, because its “handaufzug” movement requires winding daily. The watch is not easy to find in the United States, but some models are stocked at the Museum of Modern Art in New York. The Driver costs about $1,000.

Autodromo Ford GT Endurance Chronograph. If the “Ford v Ferrari” saga has faded from memory, here’s a watch that will rekindle that furious competition from the mid-60s. The Heritage 67 dial echoes the livery from the class-winning Ford GT that ran at the 2016 24 Hours of Le Mans. It’s a bit busy up front, but rather striking with its red-and-blue dial. Autodromo says the watch is “officially licensed” by Ford. The price is $695 from autodromo.com.

Roger Dubuis Excalibur Spider Pirelli Double Flying Tourbillon. Dubuis creates watches for the likes of Jeff Bezos and the Saudi princes. The gimmick here isn’t so much the watch itself but the strap: It’s made of rubber from a Pirelli tire that was used in a Formula One race. The mechanics of the watch are certifiably over the top, but wait, there’s more, according to Dubuis: “The flying tourbillon at 7 o’clock is rimmed by speedometer-like seconds counters enhanced with automobile-inspired pointers, while the multicolored power-reserve indicator represents a cool nod to racing-car cockpit fuel gauges.” The price — hold on to your hat; hold on to something — is $315,500.